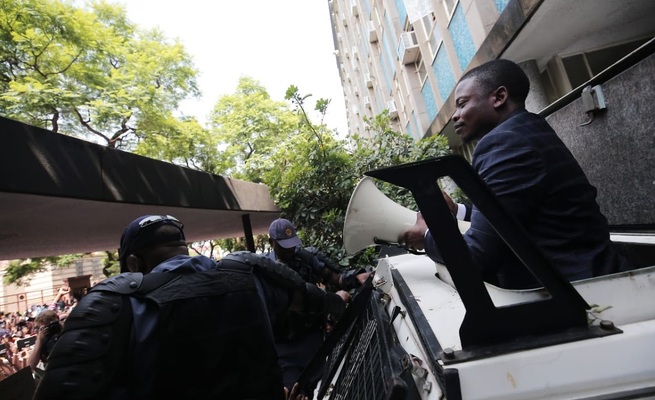 ALEX residents seemed divided this weekend over whether Prophet Shepherd Bushiri must administer the R400,000 donation he made to the victims of a shack fire or hand over the money to the City of Joburg’s disaster relief department.

Bushiri visited the area after a resident allegedly left a pot unattended which sparked a fire that later brought down an electrical pylon. Addressing residents early on Thursday evening, the head of the Enlightened Christian Gathering (ECG) Church said he was saddened by the impact of the fire on the children of Stjwetla in Alex, north of Joburg.

One of the residents, James Baloyi, said he wished for Bushiri and his team to buy books and uniforms, including shoes, for the children.

“It’ll mean so much if residents received these things from Major 1. “It’ll be like a gift from him. Like Christmas,” said Baloyi.

He added that he was concerned that if funds were given to the City of Joburg, it might take too long before help reached the beneficiaries.

“You know government people take their time. They will be telling us about the laws, and before you know it, everyone has forgotten about the money and then it disappears. “I believe Bushiri should deliver it [the money] himself,” said Baloyi.

But another resident begged to differ. Ishmael Masemola, who stays in the area but his shack was not affected, said he preferred Bushiri to hand over the funds to the city.

Masemola said the city was experienced with disaster management and already had teams working on the ground in Alex.

“Asking Major 1 to distribute the funds means he must start afresh and create his own list (of affected people). It’s too much work, too much duplication. But either way, I was just happy to see him in our area,” said Masemola.

A crowd of well-wishers got wind of Bushiri’s visit on Thursday and started screaming ‘Papa,’ ‘Major 1’. While some asked Bushiri to pray for them, others simply threw themselves at him and took pictures, causing a headache for his security personnel.

Bushiri said the R400 000 was meant to help mostly children who have lost books and school uniforms. He said his impression was that while the R400 000 would
help, people did not need material things, but spiritual encouragement and prayer.

According to Makhudu Sefara, owner of brand management company Unscripted Communication, which manages Bushiri, the prophet had gone to Alex on an “exploratory trip” to assess the extent of the damage so he could make a “determination on the type of impactful assistance required”. Sefara said Bushiri was touched by how children were affected and decided on the spot to make the donation.

Sefara explained that while logistics would be sorted the following week, Bushiri promised Alex residents that he would return on Tuesday with pastors from his church to provide more holistic help, including prayers, to the community.

City of Joburg spokesperson Luyanda Mfeka said he couldn’t comment as he was not aware of the matter. “I can’t share the city’s position on that because we don’t know anything about it,” he said.