Home General News Meet the Port Elizabeth man who was swallowed by a whale and... 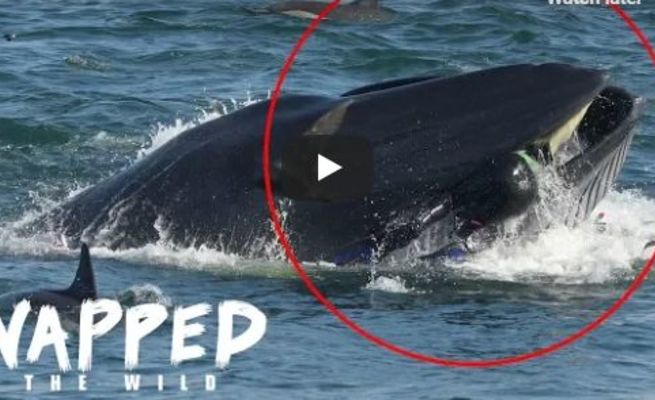 A tour operator in Port Elizabeth narrowly escaped being eaten by a whale.

Rainer Schimpf, 51, who takes tourists whalewatching in Algoa Bay, was filmed with his legs hanging out of a Bryde's whale's mouth.

Schimpf's wife, Silke, watched in horror as her husband's head and torso disappeared into the whale's mouth as he was filming a bait ball of sardines in February.

After several seconds, the whale spat out the wetsuited snorkeller, who said he held his breath while expecting the whale to dive.

Videos of the drama, which happened about 46km offshore during the sardine run, are racking up views on YouTube.

Schimpf said he was filming dolphins, dusky sharks, gannets, penguins, cormorants and gulls feeding on the sardines, with two security snorkellers swimming alongside him, when the whale rocketed up through the bait ball.

"Suddenly the whole world around me got dark and I felt enormous pressure around my waist, in the area of my weight belt," he told mype.co.za.

"I knew instantly what had happened – a Bryde's whale had accidentally included me in its mouth with its meal of the day. Comforting to me was the knowledge that the whale would be unable to completely swallow me into its stomach.

"My hard-won experience kicked in and I instantly held my breath, thinking that the whale would instinctively dive down again before spitting me out somewhere in the depths of the Indian Ocean.

"I felt the pressure increase around my waist, which is when I guess the whale realised his mistake as he turned sideways, opened his mouth slightly to release me and I was washed out, together with what felt like tons of water."

Schimpf said he was dragged to the surface by the buoyancy of his wetsuit. "I swam back to the vessel, climbed up and checked if I and the camera were OK. No broken bones, no cracked ribs so all was good," he said.

"I was pumped up with adrenaline and the bait-ball action was still ongoing, so I went back in looking for sharks."

It was only when he looked at photographs of the incident that Schimpf realised how lucky he had been.