Home General News 'I heard a taxi hit her and the driver ran away': Dad... 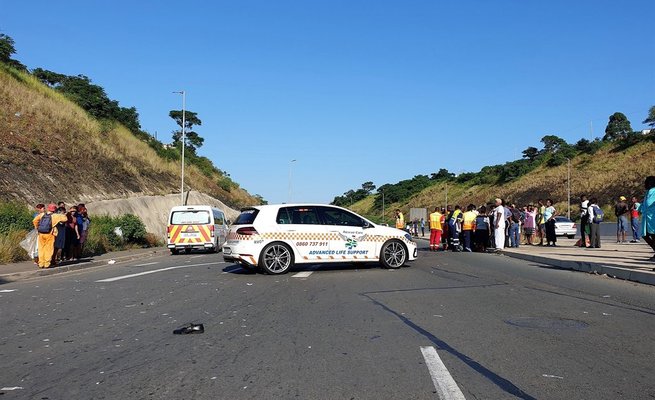 “I didn’t even know what she wanted to be when she grew up because she was still small to me. But now she will never grow up,” her father, Thulani Mtshali, said.

Mtshali answered a telephone call on Wednesday morning that no parent should receive.

His 14-year-old daughter was dead.

The father of one of the girls knocked dead by a taxi says he is numb. Thulani Mtshali was at work when he received a call that his 14-year-old daughter Ayanda was dead. @TimesLIVE @yasantha pic.twitter.com/PCJfPYaKwh

Ayanda was among four schoolgirls who were knocked down by a taxi in Newlands East in Durban on Wednesday morning.

The four girls were on their way to Newlands East Secondary School when a taxi driver allegedly shot a red robot and ploughed into them. The vehicle dragged the girls for several metres before it came to a stop. The driver then fled.

Three of the girls died on the scene, while the fourth girl was rushed to hospital. She is in a critical condition.

“I was at work when I received a call from one of my neighbours. She informed me that there was an accident and that I must rush to the scene. She told me Ayanda was involved in the accident.

“When I got there I found out that my daughter had passed away and I confirmed that my child had passed away. I heard that a taxi hit her and that the driver ran away. That's all I know for now,” Mtshali told TimesLIVE.

“Her face was not injured. At least I could still see her face,” Mtshali said.

Ayanda’s mother was inconsolable and had to be taken home from the scene.

“I am numb. I am shocked. I don’t think that I have processed what has happened. Ayanda was a normal teenager. She was always joking around. What more can I say? She barely lived her life,” Mtshali said.

Ayanda’s shoe lay just behind the crime-scene tape that marked the start of the area where the incident took place. Her friends’ bodies were further up the road.

It was the first time that “such a huge tragedy” had struck the school.

“"For now, we are keeping the pupils in school and talking to them,” he said.

The pupils were expected to write first-term examinations on Wednesday morning.

Ndlovu declined to comment on whether the examination would go ahead as planned.

Parents of three girls killed when a taxi hit them on the way to school in Newlands Durban are hysterical on the scene. One collapsed and had to be carried away. The three bodies covered in foil are a sore sight on this busy road @TimesLIVE @yasantha pic.twitter.com/YJh0mRBnxI

As more parents arrived on scene to establish if their daughters were among the dead, the community shouted at passing minibus taxis, demanding to know where the taxi driver was hiding.

“Something has to be done about it. There have been several crashes here because those in the taxi industry continue to ignore the rules of the road in this area,” she said.