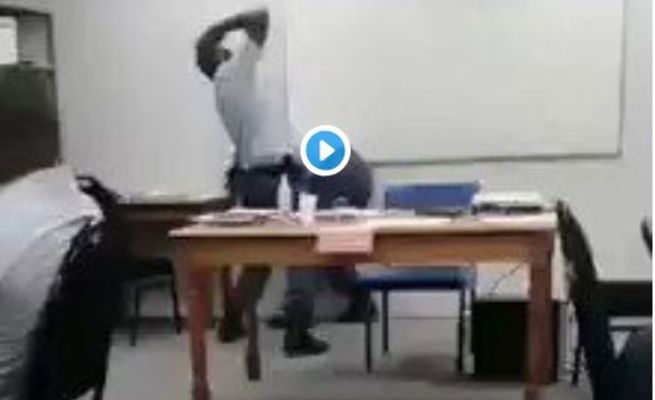 Johannesburg – KwaZulu-Natal police have slammed the recording and sharing of a widely circulated video clip showing what appears to be a physical altercation between two police officers as "malicious".

This as a video began making the rounds earlier this week showing what appears to be a male officer repeatedly hitting his female colleague while other officers seemingly watch on.

The video sparked mixed reaction on social media, with some users calling on SAPS to take action against the officer and others calling it distasteful to post such a video, irrespective of whether it's real or not.

KZN police spokesperson Brigadier Jay Naicker on Wednesday condemned the posting of the video, which he explained was a re-enactment of a real-life domestic violence situation.

So this video just emerged… SAPS 'man' assaults a female colleague, whilst other members looked on and did nothing. This piece of trash pig needs to be arrested, charged with assault and thrown into jail. #SAPSAssault @SAPoliceService Do you condone this? Sort out your members. pic.twitter.com/Z8EhrrRM1H

"This re-enactment forms part of a module for domestic violence training that police officers are mandated to attend.

"It is suspected that a police official who might have attended this training intervention at our Durban Training Center last year, could be responsible for recording this scene and posting the clip online. We are indeed perturbed and believe that this individual was extremely malicious because of the timing of the release of the video," Naicker said.

Naicker urged citizens in possession of the video clip to not re-post it, saying that while the classroom setup highlighted that it was indeed a training session, some people may not immediately realise this and may be disturbed by the contents.

He confirmed that an investigation had been launched to identify the perpetrator and ensure that he or she is brought to book in terms of SAPS's internal disciplinary regulations.