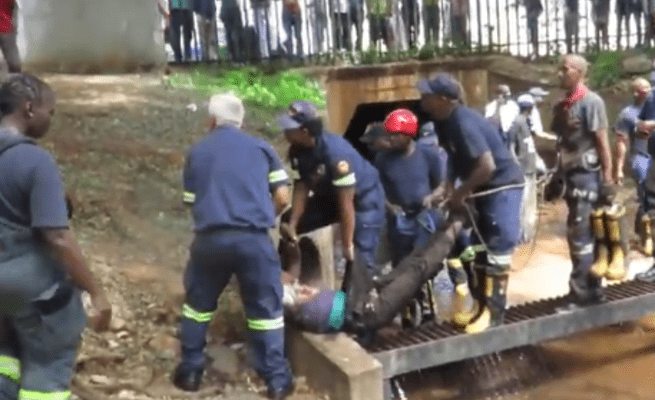 HE RAN away from an angry mob but then found himself trapped in a dark water canal.

But it was not his time to die.

THE LUCKY THUG CHEATED DEATH . . . TWICE IN ONE DAY!

He tried to steal a car battery from a car in Meadowlands, Soweto.

But the owner and his friends saw the young thug and chased him. Soon the community was on the boy’s tail.

When the thief heard the people screaming for his blood, he ran as fast as he could, looking for any place to hide.

He ran into the dark tunnel under the road near Dorothy Nyembe Park in Soweto and went in as far as he could go. While this meant that he had escaped from the mob, he suddenly found himself trapped under the bridge, which was filled with water.

He got stuck and he couldn’t go forward or backwards. And then the cold set in.

Eventually he started calling for help.

People stopped and came closer to see what was happening. Even his chasers tried to help him but no one could reach him.

Eventually paramedics and firefighters were called to help.

After hours of struggling, to the sound of cheered spectators, they eventually managed to get him free and pulled him out.

The boy was freezing but still alive. He was taken to hospital by ambulance.

Angry resident Magundu Mtshali said they should have left him there.

“These boys steal everything for us. We are suffering because of them and their nyaope addiction,” he said.

However, a pastor who was watching, Pastor Sabatha Majola said: “No need for him to die. God has given him a chance. Maybe he’ll change his ways after this.”

He said they were called after a boy had attempted to go through a tunnel and got stuck.

“When we got there, he could talk but couldn’t move. We had to use rope to rescue him,” he said.

“First he escaped the mob and escaped drowning. Lucky him.”