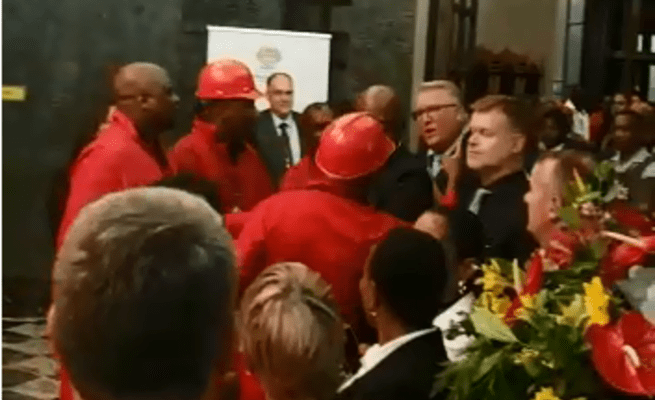 THE Economic Freedom Fighters (EFF) has confirmed an assassination threat on the life of its leader Julius Malema.

On Friday morning, a video of an EFF member beating a security wearing black and white closes made the rounds on social media.

They say their actions on the video were a means to protect themselves.

The fighters say the security threat implicates elite members of the police, who allegedly are in collaboration with a right wing group to take the life of Malema.

In a statement the EFF says: “In an attempt to undermine the advances on the expropriation of land without compensation discourse, that will soon be law.”

“We are told that the Parliamentary Security Service a.k.a ‘white shirts’ have been infiltrated by these groups and targeted the occasion of the SONA to execute the assassination,” the EFF said.

In order for the assassination to be carried out, allegedly there was a hope that EFF caucus would be kicked out of the house, using the Parliamentary security.

“The anticipated evil acts would then be carried out during this moment of chaos.”

“The EFF can this and any further inquiries regarding this threat must be directed to the SAPS and the minister of police,” the statement further stated.