Home Entertainment Thembsie Matu who plays Petronella in #TheQueenMzansi speaks on her 31 years... 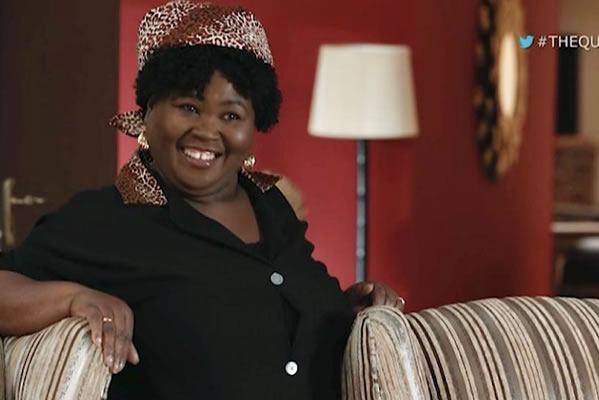 DOUBTING yourself can be quite tempting when things do not happen at a time you anticipate. But no one quite understands how God’s timing is perfect than veteran actress, 53-year-old Thembsie Matu.

This year marks her 31 years in the acting industry but it took blood, sweat and tears to get the recognition she enjoys now. The actress says she has learnt that when God has not allowed for something to happen, you have to accept and wait for His time.

Looking at her success, especially in the past year, she understands why she had to wait and fail as much as she did over the years. Late last year, Thembsie couldn’t believe what God had planned for her when she walked away with the Favourite Actress and Ultimate Viewers' Choice awards at the Mzansi Viewer’s Choice Awards.

“Last year was really a good year, so this year can only get better. I am looking forward to winning some awards, maybe three at least,” says the actress who plays Patronella on The Queen.

She recounts one of the defining failures of her life, way before her acting career even started. “I attended a secretarial course where I had to learn how to type. I remember typing a whole page only for the paper to be given a big fat red cross. As I got used to typing, my mistakes started being circled but I did not stop going,” she says.

The biggest lesson for her was that, there is always room for improvement and that is why when she fails at something, she doesn't give up on mastering it.

Although an experienced actress who has won the hearts of viewers, the role that saw her reaching for the stars was that of Patronella. On the show she’s loud, dramatic and incredibly funny – just the perfect remedy for night TV.

“Yoh!,” she exclaims like she normally does on TV. “The love I have received for this role is crazy. I still can’t believe how much viewers love me. Honestly, it is quite scary to be loved like this,” she says.

An elated Thembsie adds, “I am allowed to do whatever I want with my role on The Queen. I don’t hold back and that keeps my creativity flowing because I am able to be the performer that I am.” Thembsie says she is reminded of the late Gibson Kente days where your craft was the only thing you could rely on and not social media followers. She looks forward to a day where the trend of giving acting opportunities to people with impressive social media following is scrapped.

However, a few months ago, she joined social media and says she already has a good following. But she is not letting that get to her head because what matters is her stellar performance on set and paying a lot of attention to that.

“You find that a person is followed because she is showing her bum in her pictures. The truth is that people are following her bum and not her talent,” Thembsie laughs but emphasises the seriousness of the issue.

Thembsie is a proud owner of a house in Soweto where she is very popular. At her house, she has decided to share her gift with children who aspire to be in the acting industry.

“I am reminded of Gibson Kente so much. A lot of us in the entertainment industry would flood his house, wanting to learn from his greatness. Today, I am able to give others that opportunity,” she says. Her biggest dream is to also reach out to children in rural areas where she believes there is a lot of undiscovered talent. The social media era has created a lot of illusion, something that is often not aligned with reality. “Children are laughed at for not speaking proper English. English is just a language and nothing else. It doesn’t mean that you are clever if you can speak the language fluently. I always say that you cannot let anyone tell you what you can or can’t be,” says the actress.

Thembsie’s success has positioned her brand well. She has collaborated with big South African brands through her work. Despite getting endorsement deals, acting is still her number one passion and she promises viewers more doses of laughter and well-crafted performances throughout the year . “I have been in the entertainment industry for a very long time, but I’ve never stopped putting in a lot of effort into my work,” Thembsie concludes.