Home Entertainment No one will ever replace him: Musa Mthombeni speaks on life without... 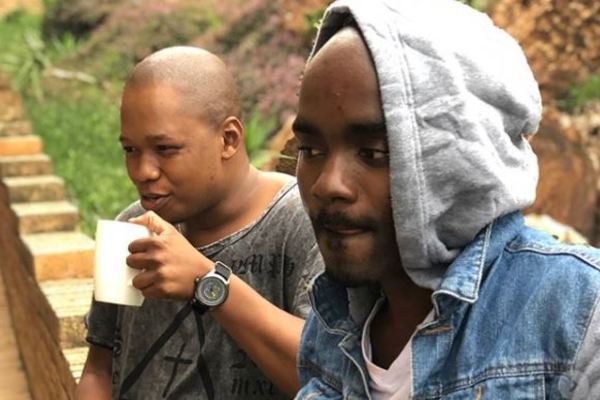 He was hungry to win. It was more than just his reputation on the line – he wanted to honour his best friend’s memory. After all, his friend had won the cooking competition in 2017 and had taken him to Mauritius after winning a trip to the island as part of his prize.

Musa Mthombeni did win and this time a holiday in Zanzibar was on offer – but it will be a bittersweet vacation for the 28-year-old. His closest friend is gone and nothing will be the same again.

Musa still misses Akhumzi Jezile, the popular TV presenter and producer who died in a horror crash last year along with singer Siyasanga Kobese and actor Thobani Mseleni, every day.

But he believes Akhumzi’s spirit is still with him – and it was there too when Musa took part in the annual White Star Celebrity Cook Off. Joining forces with TV personalities Andile Gaelesiwe, Manaka Ranaka and Miranda Ntshangase, he and his team squared off against four other teams to create a two-course meal.

Team Pap Capture, as they wittily called themselves, certainly felt the heat in the kitchen. But in the end their seafood starter and lamb stew with savoury couscous made from maize and topped with a runny egg saw them taste victory.

“Guess who I’d love to take along to Zanzibar,” he says, opening up for the first time since the loss of his beloved “Kumi bear”.

As a trained doctor Musa is familiar with death but nothing could prepare him for losing his friend.

Musa and Akhumzi go way back, having met on the set of SABC1 hit children’s TV show YoTV when Musa was 12 and Akhumzi 13.

“I miss his laugh. I miss his mockery of my so-called perfect life and my dark skin.”

The pair were more like brothers than friends and even though he spent Mother’s Day with Akhumzi’s mom, Zoleka, “no one will ever replace him”.

Musa says it’s been a battle to “hold it together in public”.

“As a doctor, I’ve seen a lot of grim things. Dead people, people’s legs being cut off . . . We’re trained to distance ourselves from a painful situation.”

Yet away from the public eye, Musa, who is also a presenter on SABC3 talk show Trending SA, falls to pieces.

“Every day there’s a reminder he’s no longer around.”

Just recently he was listening to Durban singer Mlindo’s debut album on the way to work when he washit by a wave of emotion.

“Everything just flooded in. I stopped the car on the side of the road and cried. I realised I’d had a rough 2018.”

A month after Akhumzi’s death in April, Musa also lost his grandmother, Leenah Mthombeni (96). He was heartbroken but says Akhumzi’s death was a bigger blow because it was so unexpected.

Akhumzi was 29 when he died. Musa had seen him six days before when they’d celebrated Musa’s birthday with a braai at his home in the south of Joburg.

Just shy of a week later Akhumzi texted him.

“He told me he was going to the Eastern Cape and wanted me to come along but I couldn’t as I was going to MC a friend’s wedding in Cape Town,” he recalls.

When he landed in Cape Town on the Friday, he got a “random” call from Akhumzi.

“He said he’d see me when he got back from the Eastern Cape.”

It was the last time he spoke to his friend.

On his way to the wedding the next morning, Musa received a call from Akhumzi’s uncle Lizani Jezile telling him his friend had died in a car crash.

Musa refused to believe what he heard.

“I cross-questioned him and hung up after I told him I’d only believe him if he’d actually seen the body.”

“He said another uncle had gone to the scene and found Akhumzi’s licence and his ID book.”

“But I was in denial,” Musa adds. “I dropped my friends off at the wedding venue and took a flight back to Joburg.”

Throughout the flight he prayed.

“I was hoping someone would say it’s a prank.”

But the harsh reality hit home when he arrived at Akhumzi’s house and saw cars snaked around the property.

“I’ll never forget that moment – seeing all the people there confirmed it wasn’t a joke,” he says. “[Childhood friend] Andile Ncube and I sat in the car for a long time crying.”

Musa helped arrange Akhumzi’s funeral and says it took a long time for his friend’s death to finally sinkin.

“I became very administrative to avoid the pain.

“I’d work on funeral arrangements during the day and would only cry at night when I was home.”

Laying his friend to rest has brought Musa some closure but “as content as I am right now with my life, I know his energy is amiss”.

He met Akhumzi a year after he made his TV debut on YoTV.

“I had ambitions of becoming a doctor but I also wanted to be an entertainer because I grew up watching a lot of TV.”

He spent a lot of time indoors because of his strict parents. Yet Musa’s teacher mom Khayakazi Mthombeni (55) and his father Philemon Mthombeni (57), a court interpreter, supported him when he auditioned for the kids’ entertainment show.

Having been an audience member on YoTV and M-Net’s K-TV, Musa had picked up some presenting tricks and a week after his YoTV screen test he was told he got the job.

The child star hadn’t even hit his teens when he started earning R8 000 a week. He lightens up as he recalls how his parents kept him grounded when he found fame.

“My mom was the disciplinarian and my dad the sweet one. It was a good balance. If I asked for a pair of Adidas takkies, they’d ask what for and tell me to go and do my homework,” he says with a chuckle.

“My parents have always advocated for education.”

He adds they “did an amazing job” of raising him, his sisters Masechaba (26), who’s a lawyer, and Mbali (25), an accountant, and baby brother Tshepo (17), an aspiring rapper.

Having heeded his mom and dad’s advice to hit the books, Musa spent years out of the public eye training to be a medical doctor. He specialised in radiography at medical school after being inspiredby medical TV show House.

Patients often recognise him while he’s in his hospital scrubs and “some even ask for pics while they’re injured or bleeding”.

He’s at the hospital from 8am until 4pm every day then heads off to film scenes for Trending SA from 5pm to 10pm. It’s a tough juggling act but Musa says the long hours help him push through the pain of losing Akhumzi.

“It’s my coping mechanism, I guess.”

Work, he says, keeps his mind off the harsh reality that he’ll never see his “brother” again.