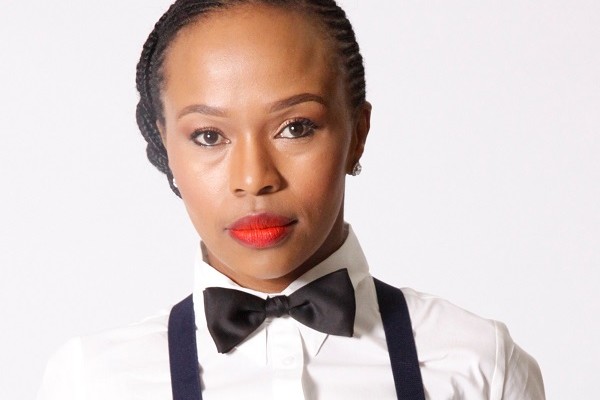 SHE’S the ruthless matriarch of a mining family and nothing will stop her from getting what she wants. Between trying to marry off her gay son to save her crumbling empire and plotting to have her stepdaughter and husband murdered, there’s no end to moneyhungry Lindiwe Dlamini’s devious ways.

She’s the villain everyone loves to hate – including Sindi Dlathu, the woman who brings this charismatic character to life.

The talented actress plays the cold-hearted killer in The River and loves being the baddie. “She gets to do so many gory things, things I could never dream of doing! She’s the opposite of me, so much so I don’t recognise myself when watching the show on TV.”


Sindi shocked fans when she announced she was leaving Muvhango. For two decades she’d set screens alight as Thandaza Buthelezi, the corporate hotshot who became synonymous with the show.

She says people still stop her in the streets to tell her they miss her Muvhango character.

With so much content available these days, she’s floored by the support. “People are spoilt for choice, so knowing they watch me is really humbling.”

She certainly hasn’t disappointed in her new role, though. Every week legions of fans tune in to 1Magic to catch her in action.

“I mostly work with young people, and it’s inspiring to see so much great, wonderful energy,” Sindi (45) tells DRUM.

“There’s something very special about being around when a show is starting up, from the time the show was pitched to me by the executive producers, to getting the scripts to finally shooting.”

Seeing it come to life on screen has been highly rewarding. And she’s particularly proud The River made local film history when it featured a crossover episode with popular TV show The Queen.

IN THE memorable episode screened late last year, Harriet Khoza (Connie Ferguson) comes to town to help Lindiwe slay her biggest enemy. “The crossover was so exciting as it was something that’s never been done on South African television,” Sindi says. She and Connie got on “incredibly well” and loved every moment of teaming up to tackle Lindiwe’s problem. “It was very exciting, from the time Connie walked on set to the scenes where we killed Goliath [played by Kennedy Stab].

“I think it’s something our viewers thoroughly enjoyed and I’d like to do more of that,” she adds.

Sindi is giving fans more than they bargained for: it’s a little-known fact she’s the voice behind The River’s theme song. “A lot of people didn’t know I sang.”

Yet the fiercely private star says “there’s no way” she wouldn’t be able to hold a note having toured the world with Mbongeni Ngema, singing and dancing on stage performing in Sarafina!.

Singing has always been a major part of her life and she’s recorded a few unreleased songs in studio. “Music is healing,” says Sindi, who counts Swedish outfit Abba as one of her favourite bands.

The River’s executive producers, Phathutshedzo Makwarela and Gwydion Beynon, who’ve previously worked with Sindi, asked her to perform the show’s opening song. They roped in accomplished South African composer Brendan Jury and Monde Msutwana of Idols SA fame to pen a new track. “The ground is thirsty, the drought is never- ending . . . life is the river,” they wrote.

Sindi hit the studio to add her vocals to their lyrics, proving there’s no end to her enormous talent. She’s a deadly triple threat but the savvy businesswoman says acting is her first love.

She’s been at it since 1988 when she broke out in Sarafina! yet nothing could prepare her for working on The River. Unlike other soapies that are shot on set in a controlled environment, the telenovela is filmed entirely on location.

“That means we’re not in control of factors like the weather, cars, etc,” Sindi says. On some days she spends up to 15 hours on set because “whenever nature takes its course, we have to stop shooting”.

SINDI heaps praise on her colleagues who go to great lengths to deliver The River’s daily drama. “Every department goes out of its way to make sure the show looks excellent,” she says. Despite the challenges of shooting on location, she loves every moment of filming alongside talented co-stars Hlomla Dandala, Moshidi Motshegwa, Presley Chweneyagae and Thoko Ntshinga among others. “My schedule is hectic as I interact with most characters, but I try to rest as much as I can by going for massages and taking holidays,” she says. She also sleeps a lot to recharge.

Fans often ask her how to make it big. “Be willing to put in the hours to learn and to grow,” Sindi says simply.

“Nothing is as stifling as a person who isn’t teachable. You stop growing when you stop learning.”

Her movie, stage and TV credits are as long as Rapunzel’s hair but she’s always open to learning. “I’m not walking around saying, ‘I’ve been acting for all these years’. I want feedback about my work.”

She adds that people need to work hard if they want to make it in this industry and nothing beats being professional and respecting your craft. “Talent, commitment, professionalism and passion will take you far,” she advises.

Sindi says the key to her longevity is respecting her work and colleagues. “I’m polite to everyone I interact with.”

This year she plans to dig even deeper as an actress, and fans will no doubt be glued to their seats as they get their regular fix of the sensational star down by The River.