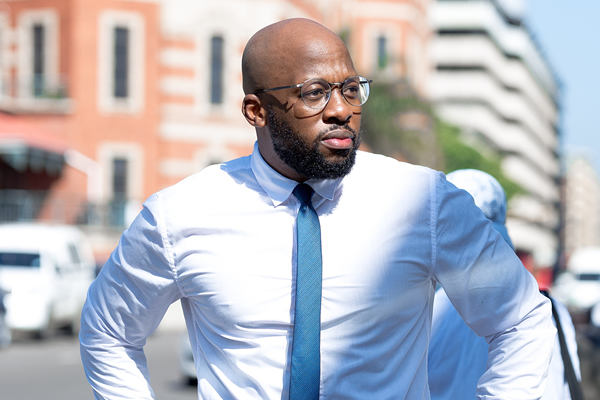 Cape Town – His is the voice hundreds of thousands of people tune into every day as they fight their way home through rush-hour traffic at the end of a long day in the office. Bongani Mtolo has become a household name in KwaZulu-Natal, presenting East Coast Drive on Durban’s East Coast Radio with his co-presenter Mags (aka Margaret Westerhof, the former Big Brother contestant).

He’s living his dream, he says. Ever since he was a little kid he fantasized about becoming a radio DJ, soothing listeners with his tunes and entertaining them with his words. But this hasn’t come easy: Bongani (36) tried for years to get his big break and almost went bankrupt in the process, after leaving his lucrative job as a car salesman to follow his heart into broadcasting.

Things hit an all-time low when he was so broke he couldn’t afford to get home after a shift and was forced to sleep under his desk. To make matters worse, his wife Zama lost her job too and for a while the couple – who has two sons, Lwazi (9) and Khwezi (4) – didn’t know where their next meal was coming from. But he persevered, the golden guy of KZN radio says, and just look at him now.

He tells us his tale of trial, error – and eventual triumph.

Becoming a top radio DJ had been a dream he’d nurtured since he was six years old and met his idol, DJ Bhodloza Nzimande.

Bongani’s parents, Busisiwe and Mgijinyelwa, were both schoolteachers in Richmond in KZN and his dad had taught Bhodloza. “He was from my area and came to see my dad,” he recalls. To the young Bongani, the job of DJ seemed impossibly glamorous and he told himself he’d own the microphone one day. He went to the prestigious state school Maritzburg College on a basketball scholarship and went on to become a top salesman at a luxury car dealership in Pietermaritzburg but he never let go of his DJing dreams.

He sent demos to East Coast Radio at a relentless rate and was rejected time and time again. Yet it didn’t deter him. “In 2014 Zane Derbyshire, the programme manager at the time, replied to the 20th demo I sent and said he doesn’t want to be rude, but it’s not what they’re looking for. I told him I’d send one more demo, he must listen to it and if he still didn’t like it I’d never send another demo again.” His determination and his 21st demo got Bongani a foot in the studio door. “Zane gave me a trainee spot on the weekend shift between midnight and 3:00,” Bongani recalls.

It was exciting but it was a tough gig too. He had to drive nearly 100km from his home in Pietermaritzburg to the studio in Umhlanga Rocks, north of Durban, for the job. And the money, he says, “was peanuts, maybe R100 for a slot”. Nonetheless, he impressed enough to be moved to a slightly better slot, the weekday 4:00 to 6:00 show, and while it was a step up in radio it made his daily life difficult to say the least.

“I’d wake up at 2:00, get dressed for work, leave Pietermaritzburg, drive to the studio, get there at about 3:15 and prep for the show. At 6:00 I’d drive back to Pietermaritzburg to pick up my laaitie, drop him off at school and get to work at 8:30.” He was always on his feet at the car dealership because he feared he’d fall asleep if he sat down. After landing the 6:00 to 9:00 slot on a three-month contract in 2015 he realised he’d have to give up his job at the dealership if he was going to be committed to making his dream come true.

His wife, Zama (29), also had a good job in car sales and the couple figured she could carry the lion’s share of the family’s finances while he climbed up the ladder. Then disaster struck: the dealership Zama worked for went out of business and Bongani’s meagre salary was all the family had to depend on. They had very little money for food, he says, and they survived on two-minute noodles.

Bongani was forced to rent his car to a friend for extra income and took public transport to work. At least nine times he couldn’t afford to get home and spent the night under his desk, hoping no one at the station would find out. “It was hard,” he admits. “I couldn’t tell people because I had a reputation to maintain at the studio.

“I cried most nights but I had already made up my mind this was going to work and I would do whatever it takes. My mind was like, ‘This is part of what needs to happen’.” And he was right. Listener numbers on his show, East Coast Urban, started to take off and soon they’d soared to half a million. “I think because of social media, presenters are all about image and being perfect on radio. I share most things with my listeners.”

Things got even better for Bongani in August last year when the station offered him the drive-time show when veteran DJ Phat Joe’s contract wasn’t renewed. This time he wept with happiness. “I cried for days!” he says, laughing. “I think what happens when you receive great news like that is you start remembering all the things you’ve been through. I called my mom and dad."