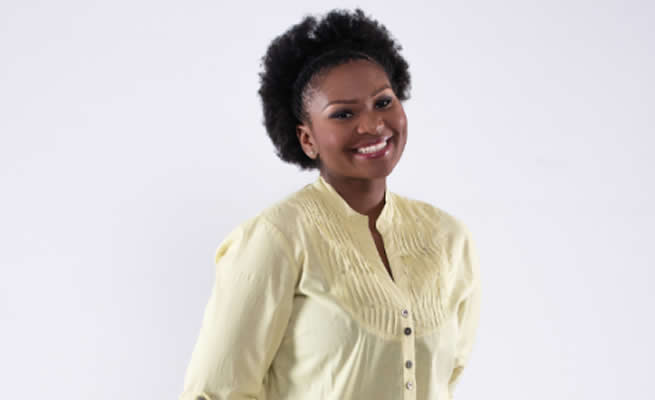 Sisekho Velelo has finally made it. The actress, who has featured in supporting roles on TV shows the likes of Ingozi, Sokhulu and Partners, Scandal and Igazi is now part of SABC1’s prime-time award-winning soapie, Generations: The Legacy.

She plays Grace, who is a naive, humble and hardworking lady. Grace is unnoticed, but wants more for her life. The 24-year-old from East London in the Eastern Cape said she’d always loved the arts.

At 17, Sisekho knew she would end up on the small screen because she didn’t imagine herself doing anything else other than acting. Like every up-and-coming thespian, she started in the theatre. There she had lead roles, which spurred her desire to leave a lasting impression in theatre, TV and film production – here at home and abroad.

Speaking to SunBuzz, Sisekho says being part of a production she grew up watching is a blessing.

Said Sisekho: “It feels like it’s happening to someone else, but I happen to spend every waking moment with this person. So, I get to witness this incredible ride she’s on.”

The actress said playing Grace reminded her that she was in charge of and responsible for the well-being of her body. Sisekho says she has very little in common with Grace, other than the fact that they share a body.

“I think that my optimism at times also borders on naivety, just like Grace’s,” the actress insisted. “I think research is key, and the script is your friend. This means reading it in a way that helps you tell a real person’s story – so you can mirror your character truthfully.”

Catch the naive Grace as she compromises on a lot in Generations: The Legacy on SABC1 weekdays at 8pm.