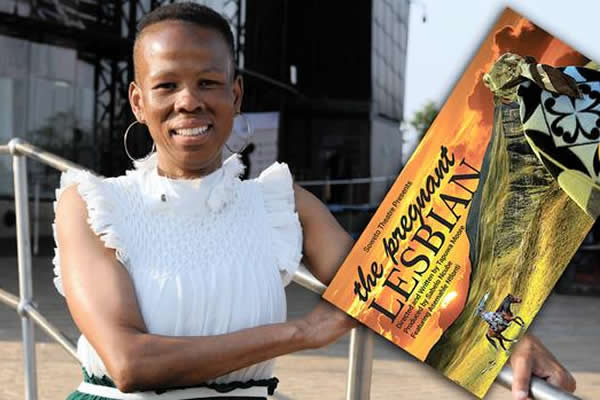 She was the victim of verbal abuse from heterosexual men and women wherever she went. They would call her names and some men would even be shocked to find out she still has menstrual cycles – as if her female body suddenly disappeared because she is attracted to women instead of men.

At the tender age of five, Tapuwa Moore (43) was brutally raped by someone she knows, who was claiming to “fix” her.

“People saw that I was not necessarily like the other girls – I liked different things. So men thought they could ‘fix’ me by sexually assaulting me.”

Tapuwa grew up in Soweto, and her family didn’t have a lot of money at home. But the one thing she enjoyed doing to take her mind off the situation at home was playing soccer. She played soccer with her male friends because not a lot females played soccer at the time in her neighbourhood.

“I was so hurt and shocked when the guys I played with, my safe-haven, also violated me in that way. I couldn’t believe it and I kept wondering what it was that I did wrong. I even thought that this is what my mother was protecting me from when she warned me not to play with boys.”

Because the situation at home was bad, Tapuwa felt she needed to do something. Her aunts didn’t make it any easier either, they kept saying, “boys go to school and girls ‘phanda’ (hustle or make a plan)”.

With those words ringing in her head, Tapuwa decided to give in to a male friend of hers who’d always had a crush on her. “He’d say things like, ‘Tapuwa you’re carrying a goldmine there [referring to her vagina], you should let me show you a good time.’”

So in exchange for some money to buy food at home, she agreed to sleep with him, “but I gave him a condom and insisted that he uses it – but when I looked away to detach myself from what was about to happen, he removed it, and I eventually fell pregnant.”

She was 21 years old when she had her son and certainly wasn’t ready, but five months into the pregnancy, when she was considering abortion or adoption, her mother stopped her and said she would raise the child herself – and she did.

After some time, Tapuwa got used to the boy and even loved him as her own child – but now, at 21 years old, Tapuwa claims that her son only considers her as a pathway to the world and not his mother.

Instead of wallowing in her pain and blaming the world, Tapuwa has decided to use her life story to teach her community and the country at large, about the LGBTIQ+ community.

“It is my responsibility to make sure people know more, so that they don’t mistreat and abuse others. I want to use my narrative to open a discussion about the LGBTIQ community and show the world that we’re people too. The discrimination against us is so gross, even our children feel it. It’s almost as if we’re not allowed to have children because of our sexual orientation.”

“My son also gets called names; people say I finger f****d him into this world. That shocked me to the core – what did I do to deserve such abusive treatment from strangers?”

Tapuwa has written and directed a play called, ‘The Pregnant Lesbian’, that sees the main character, Matshepo (played by Tapuwa), living a difficult life as a homosexual woman in a homophobic township.

“The main narrative of the play is: ‘See me as a person’,” she says.

The play ran from the 4th to the 7th of October 2018 at Soweto Theatre.