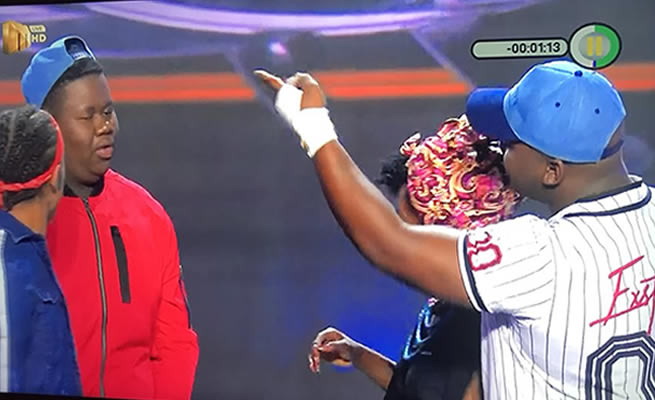 Idols contestants Mthokozisi Ngcobo and Basimane Boys Melato – known as “King B” – have cleared the air about what seemed to be a fight on the Idols stage during the top 10 announcement on Sunday.

A video which has been making the rounds on Twitter has led fans to conclude that the two have “beef” with each other.

On the video Mthokozisi was seen pointing at King B as if he was fighting with him, leading to people calling him a “bully” and accusing him of being jealous.

However, when City Press met the two contestants at the house where they stay in Johannesburg, they were calm and even laughed about the video.

Ngcobo dismissed the claims, saying he was just showing King B where to stand.

“It’s not even close to a beef or me being a bully. We were talking backstage; I don’t remember what he said. He then came back to stand where I was supposed to stand. Had you seen my face you were going to see that I was not even angry,” said Ngcobo.

“I was just tuned into what was happening there. Yes, I was crying but it was just excitement. When I am happy, I just cry. I forgot everything we were told to do on stage so I ended up standing in his place. He was not shouting at me, that is how we speak but because I was in the moment, I was emotional so I couldn’t react the way I was supposed to react as when we speak together,” said human resources student, King B.

He added that they were besties and very good roommates.

“We tell each other everything, he pours out to me and I pour out to him. There is nothing going on, people should just chill,” King B said.

Mthokozisi said he was not jealous of King B at all and he knew before the live show that King B was going to make it to the top 10.

“I was expecting him to go through, it was not a surprise. Just because I am big, everything I do is suspicious. If it was done by someone else it was going to be all right,” added Ngcobo.