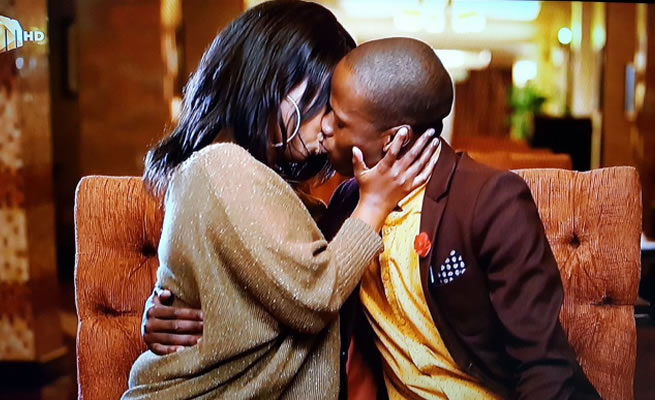 Uyang'thanda Na? viewers have never been as excited as they were on Wednesday night, after a man sealed the deal with his crush with a flaming kiss.

When viewers finally saw who Shadrack was crushing on they, together with the host Moshe Ndiki, were left shook. Shadrack's crush, Karabo, was simply breathtaking.

And after a few episodes that ended in rejection, fans were actually never ready for Karabo to say the feelings were mutual. When she said yes and sealed the deal with a kiss, it was over for tweeps.

It was the kind of kiss that comes with lobola drama and uncles asking for vula molomo at the gate. In fact, this kiss can get us the land back! Check it out.

Is this what a first kiss looks like kante?👀👀👀#Uyangthandana pic.twitter.com/AOoOFwR3Ym

Twitter was totally here for the happily ever after vibes.

They brought out the loved-up memes that had been gathering dust over the past few rejections on Uyangthanda Na?.

It had been a while since things went THIS well.

A rare picture of Karabo and Shadrack in the future 😍😍😍😍#Uyangthandana pic.twitter.com/vwxtZbAszW

Rt if you think that was a thirsty kiss #Uyangthandana pic.twitter.com/vlD4OhwH98

If this isn't LOVE then I don't know what is…honestly! #Uyangthandana pic.twitter.com/IXEv1IDDET

#UyangthandaNa i don't know about you, but i see marriage apha pic.twitter.com/UIq3BNpvYy