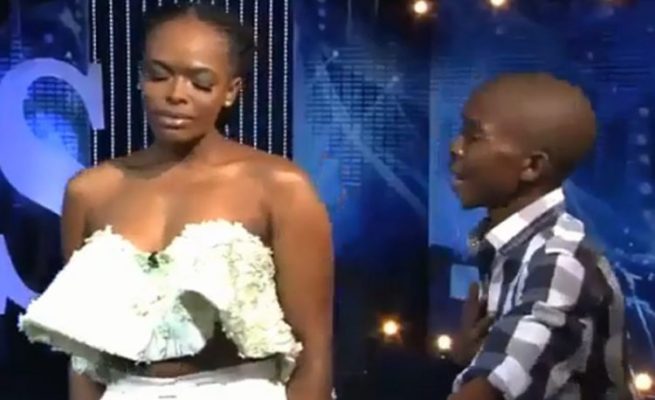 Things turned awkward very quickly when Idols SA judge, Unathi Msengana, was asked to kiss a contestant who was serenading her during an audition.

This all took place during the recent Cape Town leg of the Idols auditions, where Dr Malinga was a guest judge. The musician impressed Idols fans with his wonderful but often sarcastic feedback which set up a number of uncomfortable moments for some of this year’s hopefuls.

But none of them were as uncomfortable as Unathi when the spotlight turned on her.

We’ve seen judges and contestants entertain one another in the past, so when one of this year’s contestants, Zukisa, decided to sing Ringo Madlingozi’s Sondela, Unathi joined in.

Unathi danced along to the singer’s rendition, singing along at times, while Somizi filmed their beautiful recreation of Madlingozi’s video for the song.

However, things turned a little awkward when Somizi instructed Zukisa and Unathi to kiss
The radio and TV personality quickly snapped out of character and bolted for her seat before Zukisa could take the instruction any further.

To his credit, the would-be singer did not break character and continued with his audition – although for a split second, it looked as if he was ready to pucker up for a kiss.

Watch the awkward exchange below:

No sir! You’re not about to kiss Unathi. #IdolsSA

What would you have done if you were in Unathi’s shoes?