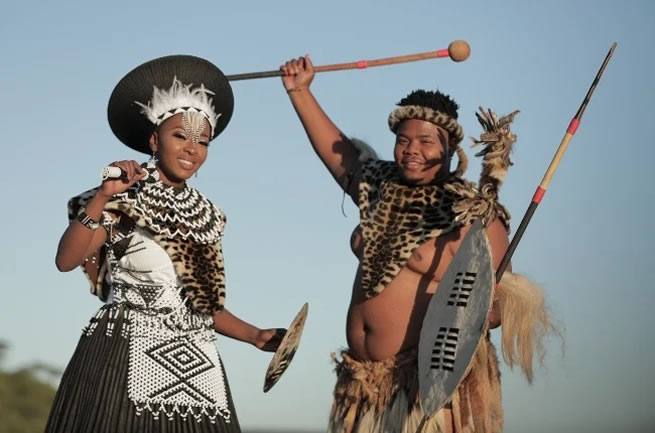 She's already been married for two years, has had her marital issues discussed and dissected on social media and she's only 17.

Her story has riled up a number of South Africans who believe she's too young to be married. They are concerned about her future but Thando Msomi of Isencane Lengane fame says she has a clear plan for her future.

And it does not involve being in a polygamous marriage or taking care of a man, she's quick to tell us.

Thando (17) has been married to Siyacela Dlamuka (18) since 2019 and she says although helping him get his life on track after he quit school in grade 9 is not a problem, she is not prepared to be a sister wife or take care of a man.

This after he mentioned on the Moja Love show that he wanted a second wife.

“A man should be the one that is the provider, and a woman must do this and that, but not have the sole responsibility of maintaining the household herself. Also, I do not want to be in isithembu.

She knows the value of social workers as they did visit her just before she got married. They wanted to make sure that she was sure about the decision she had made to get married at such a young age.

“At the time, I thought it was a good idea. Since he has changed, I am not so sure anymore.”

South Africans have been pleading with her online to leave her husband.

“Leave him and go where?” she asks.

“I see what people are saying but they do not know what we have gone through and they are saying what they are saying without knowing where it all started. I was shocked when I saw what he said on tv because he has never told me that he feels that way. And when he is with me, he is the Siyacela I know and when I asked him about the drama that happened on tv, he told me it was not true,” she says.

Thando was raised by her mother and grandmother in Durban, but when her grandmother passed away in 2014, she had to go live with relatives in Nkandla.

“Ekhaya sibaningi (there are many of us at home).”

She and Siyacela met at a wedding, she says. She was a bridesmaid and he was a guest in 2016.

“He asked me out then, but I refused because I thought he was just being a typical guy who wants to have a girlfriend in every town because he was from Ulundi and I’m from Nkandla. But he kept asking me out, he was consistent, and I could see he was really serious about me. I finally agreed in 2018,” she says.

The couple lived in different parts of KZN and his father said they should promise each other in front of the church and that their engagement should not be longer than six months.

“I was in grade 10 when we got married and he was in grade 9. His family welcomed me so warmly, I was never a serious makoti, they treat me like a daughter. He quit school because ebehlushwa yizinto zesintu.”

In the show, Siyacela has made it clear that he is not interested in looking for work or returning to school. Instead he wants to take a second wife and together, his two wives will take care of him.

Many South Africans took to social media saying Thando should leave her no good cheating husband but she is not sure yet.

She says she never expected her marriage to turn out like this and she would never advise her own child to get married young.

“I thought we would always work together and would face any challenges we face, together. I did not think this would happen.

“I would advise my child against getting married young, not because of things I have heard, but because of my own experiences.”