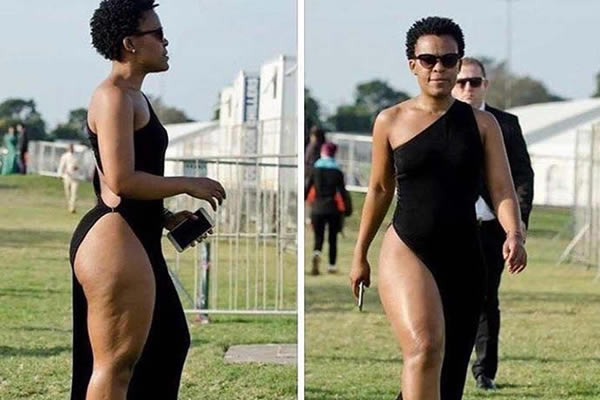 Socialite and dancer Zodwa Wabantu has promised fans she will not disappoint them with her three outfits for Saturday's Vodacom Durban July, and admitted she was feeling the pressure of topping last year’s controversial outfit.

Speaking to the Daily News, Wabantu said she knew people would be watching her after her previous outfits left little to the imagination.

“I’m aware and I’m scared but excited at the same time,” she said.

At the time, Wabantu said her dress represented who she was and that she wanted something comfortable but something that would make people talk – and talk they did.

“I had three outfits made, but the one I will enter the Durban July with will draw attention,” she said.

“It’s black and it will reveal that I will not be wearing panties.”

Laughing, she said none of her outfits allowed her to wear panties.

She will be dressed by Ngcebo’s Nonkosi Collection and all three outfits will be sexy – particularly the final outfit she will be partying the night away in.

Wabantu will be attending the event with her “Ben10 boyfriend” Ntobeko Linda, her friend, Lebo Mkhize, and her partner, Donald Thompson.

She said she and her boyfriend would be co-ordinated even though they had gone to separate designers.

People at the Durban July can expect a “chilled” Wabantu because if she is chilled then she can make others chilled and “crazy obviously”.

Wabantu is known for her raunchy dance moves and the absence of underwear but she has climbed the entertainment ladder quickly and recently received the help of famous Durban DJ Tira.

She is now seen in music videos and has been booked to perform at the Durban July.

She will perform at two marquees – the Soweto VIP Marquee and the Mementos Lifestyle Marquee.

“When I’m done performing I will be at the Afrotainment Marquee, that’s home and Tira is my boss,” she said.

People will be watching to see who makes it a memorable Durban July – Wabantu or her arch-rival, Skolopad, who also wants to climb the entertainment ladder.