Home Entertainment Is she dead? Rasta rapped after paying his tribute to retired newsreader... 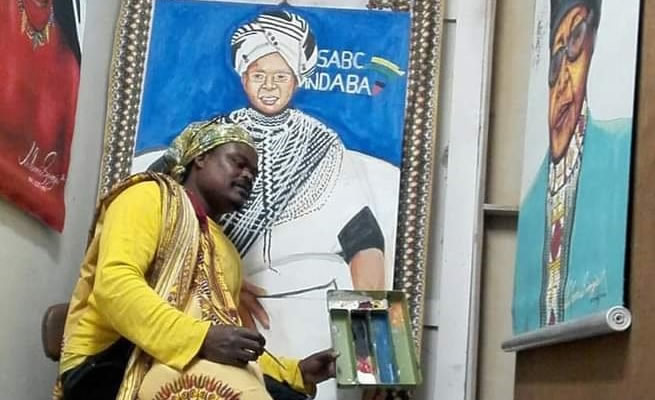 HE is back and he has done it again!

The painting has since caused an uproar on social media.

The controversial painter took to social media to reveal a portrait he painted for the retired news anchor.

"After 37 years of excellent service, we thank you for your talent Mama.

After 37 years of excellent service, We thank you for your talent Mama

Likewise, Twitter users shared their opinions on the painting and many were not impressed.

Reacting to the portrait, @Siyamtishana said: "The only thing you got right was the outfit," he tweeted.

@Luyolom said: "You could have done better than this is it because you weren’t going to face Amabutho this time."

Meanwhile, others praised him for the painting.

"Rasta is such a very good painter, it's his sense of humour for me, can't you see this is just all for some laughter, appreciate the legend," Hollywood star Liso wrote on Facebook.

Below is a wide range of feelings expressed by Twitter users over Rasta's portrait for the veteran news broadcastor:

Mmmmm he’s even listening to her to hear if she agrees to what he’s done pic.twitter.com/7X3lCp1Yum

At some point you gotta respect Rasta:
1. He knows current affairs
2. Despite his shenanigans we all wanna see his paintings.
3. The guy is really popular ..saw a newspaper article on him in Kenya.
I respect the man lol #NoxoloGrootboom

At least she got to see her portrait whilst she's alive pic.twitter.com/ascmbbyfoV

The one thing I learn from Rasta is that passion is the key before talent pic.twitter.com/NexO8dxY21