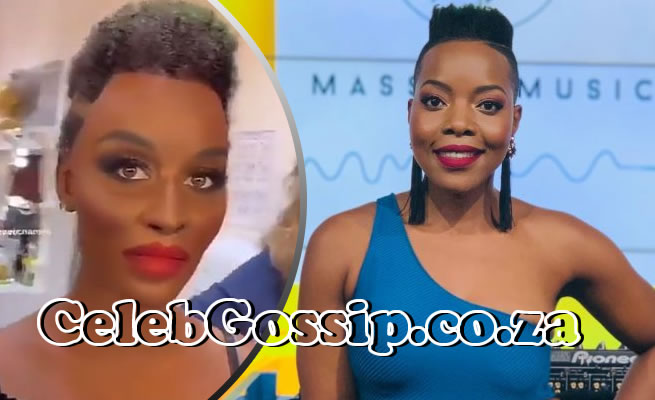 A clip of her performing the song went viral, as did one of her wearing blackface.

are my eyes deceiving me….. pic.twitter.com/rOVMr6QTnn

They did this to Nomcebo, so they mean there was no black person to do this? pic.twitter.com/Z0PYxKkhwf

But stars like Khaya Mthethwa, Busiswa and Mo Flava were not amused in the slightest at the show nor the contestant.

“This #nomcebo thing is not a joke. It’s disgusting,” tweeted Khaya, who won the title of SA Idols winner back in 2012.

This #nomcebo thing is not a joke. It’s disgusting.

Fellow singer Busiswa clapped back; “So this white woman was actually black-faced as Nomcebo Zikode to perform JERUSALEMA at an awards show?!?! WTF????”

So this white woman was actually black-faced as Nomcebo Zikode to perform JERUSALEMA at an awards show?!?! WTF???? @OpenMicProdSA PLEASE go after them. https://t.co/YkW4EfMAYi

Metro FM DJ Mo Flava was just perplexed. “I can’t to can” he tweeted alongside a very telling emoji.

I can’t to can😫 #jerusalema pic.twitter.com/m88MaQeNC5

Neither Master KG nor Nomcebo have yet to respond to the incident, although Black Twitter have come out in droves to react.

Many tweeps felt that the video was ‘disrespectful’…

Nomcebo is not a comedy costume for white entertainment, black people are not costumes! This show is trash 🚮#Nomcebo pic.twitter.com/xi96hvgxH1

They did nomcebo dirty, they must pay her #Nomcebo pic.twitter.com/YFmzTOx1Wl

People say "it's a show" Leon Schuster did it why is it offensive now" well it's always been offensive it's just that we didn't see it.Stereotypes embodied in the characters of blackface minstrels play a significant role in cementing and proliferating racism #nomcebo

Others found nothing wrong with it, even bringing up SA comedian and actor Leon Schuster into the debate…

This is just a Talent show or LipSyc Battle equivalent on Steroid. It happens all the time.

before we overreact can we please celebrate #Nomcebo , she has made it in life. Visit those people's instagram page they do that to the most famous celebrities. pic.twitter.com/uVgaLGnm9T

I stan to be rectified or corrected if I'm wrong but I don't see anything wrong in this video… I mean Leon Schuster used to do the same this and y'all were cool about it and today other people are doing the same thing y'all lose y'all cool at the same time pull a race card pic.twitter.com/wCgG5Vh1bv