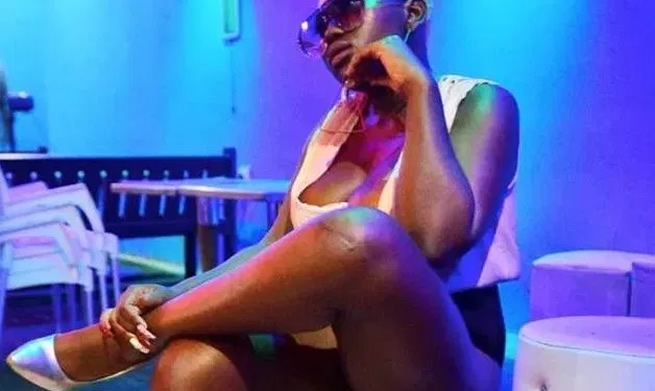 Just like Zodwa Wabantu who rose to fame by dancing naked, Noxy Mabena has followed the footsteps of the much loved and controversial Zodwa Wabantu

Mabena who comes from Daveyton, Ekurhuleni, recently opened up about her new found fame.

When she was 17 she progressed to dancing half-n@ked in clubs, pubs, or taverns.

She said her mum scolded her but she didn’t stop dancing.

“My mum eventually accepted that this is who I am. Now she supports what I do,” said Noxy.

“At first I was reluctant about taking my clothes off to dance, but after seeing the reaction I was no longer afraid.”

“I hate wearing clothes. Even when I’m on the streets of Daveyton I wear short things. I need to be able to move and I can’t do it in jeans or long skirts.”

Noxy used to have a fast-food business and was a beautician, and that’s when she decided to become a dancer. She’s a mum of an eight-year-old boy.

“My boy gloats about me and I’m happy he knows me for who l am. I don’t have to hide anything. The people of my hood have shown me nothing but love.”

She said people on social media drag her down for what she does but she’s not bothered as it’s her body.

She said she deals with perverts.

“The moment you undress they try to touch you and make you feel like you want to be harassed. But I don’t let them disrespect me.”

Zodwa Wabantu is her hero she revealed

“There are a lot of women who secretly want to do what we do but are afraid of being judged.

“She’s taught me to be myself and not let other people pull me down.”

Resident Tankiso Modise (33) said he used to groove once in a while but now grooves every weekend because of Noxy.

Lungisani Mkhize (37) said he respects Noxy as she’s teaching women to be free.