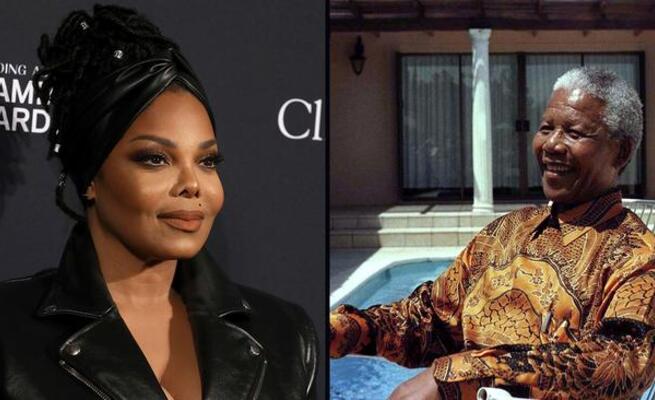 Janet Jackson recently courted controversy when she sarcastically posted Nelson Mandela's photograph in prison and used a caption that implied that the former South African leader was serving a lockdown social distancing. 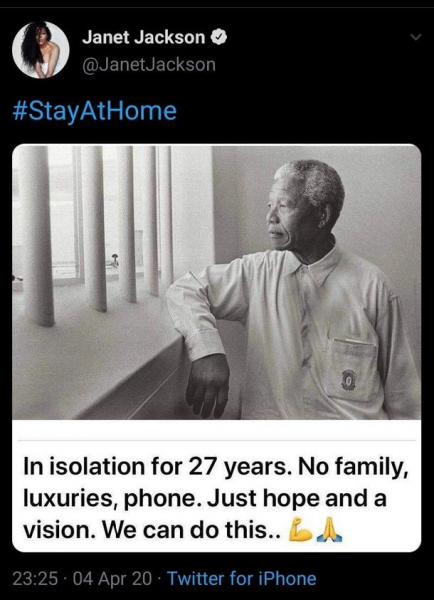 Her post could have been innocent in encouraging people to stay home and observe social distancing in order to stop the spread of coronavirus. But to some, it did not go down well with them and she was lambasted for the tease.

However, some understood her point and supported her sarcastic call to stay home.

In a now deleted Twitter post, the American singer shared a meme of Mandela standing inside a prison cell, simply captioning the image: "In isolation for 27 years. No family, luxuries, phone. Just hope and a vision. We can do this.. #StayHome."

“It’s actually less than that, people don't know that Mandela was moved into a guest house in the late mid-80s, some 10 years before his official release, this means he spent almost 10 years leaving under house arrest with family visitors and ANC negotiators, “ tweeted @C_Massala, in response to Jackson’s post.

Another Twitter user @njabzin01 commented on the post, she wrote: “So you're telling me Mandela had a choice to leave Robben Island?

Another user @IamB29 added: @njabzin01 @JanetJackson According to sis over here, he absolutely did.”

Meanwhile South African legendary television and theatre actor Dr John Kani, jumped on board with the same meme, but got a backlash for it, some told him to stop spreading wrong information. They believe Mandela did not spent 27 years in prison

In response to Kani's post, @KaizerkaMotaung, asked the "Black Panther" star: "We all know that the 27 years story is a lie, right Tata?"

"Spreading fake news during the lockdown is punishable by imprisonment. Please, Mr Kani desist from doing that. It is now common cause that he never spent 27 years in jail, " commented @Budamales.

Apparently, he had supporters too, they took his message in good faith and thanked him for being artistic in passing on the information.

"This is such a beautiful message of hope and perseverance. Smiling face with smiling eyes," tweeted @premeditatedgal.

"This is so beautiful," wrote @Philile82 in response to Kani's post.

"Thanks for the encouragement… It's needed in this lockdown, " added "@_kgweleJT.