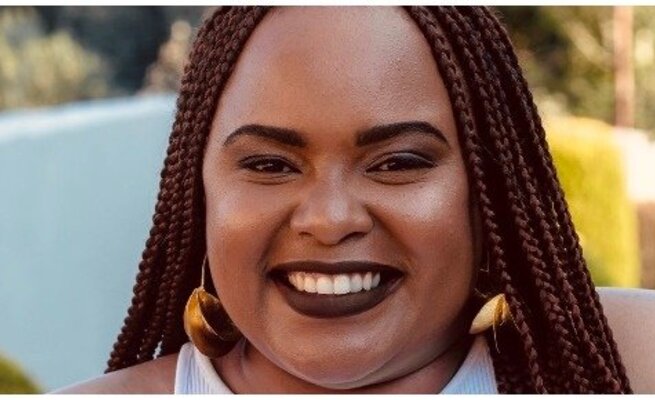 Ask Isibaya scriptwriter cum-actress Wendy Gumede about her work she would tell you it is; “pretty incredible to be in both those world.”
She began writing for Isibaya in October 2019, less than a year down the road, she is now starring in the Zulu series as Nolwandle.
DRUM magazine sat down with the optimistic artist for a brief chat.
Why screenwriting? Is it a passion?

Wendy said looking into all the things she has ventured into creatively, writing came first. “It will always be my first love. I started writing plays when I was 13 years old and would audition my friends to act in them. I would then showcase my productions at church and high school. I was a very focused teenager!

“The thrill of creating a world from scratch is what fascinates me about screenwriting – because you’re starting from absolutely nothing, absolutely anything is possible!” She said.

How did you end up acting? Did you write your character’s script?

“Acting only became part of my creative expression in university. I majored in drama along with film and TV production and media studies. After I graduated and realised how hard it is to get into the industry, I created an online presence and started doing satire.

“Two years later, my work got the attention of all the right people and ultimately, after having thousands of doors slam in my face, the right door opened at Bomb Productions for Isibaya,” Wendy added.

What do you have in common with your character?

“Nolwandle speaks her mind! She is unfiltered and has an incredible sense of humour. I definitely resonate with those facets about her. She’s also single and very ready to mingle,” she said; “Not to say I’m the same but . . . Prince Charming, if you’re reading this, hit me up!”

Looking at your acting debut, would you say it was beneficial to start off as a screenwriter?

“Absolutely! Knowing the process that writers go through to build a character really helps you understand the person better.

“Being an actor and a writer is as tricky as it is rewarding. In the writing room, one must be visible and audible and present. But as an actor, Wendy needs to disappear and let Nolwandle shine through – entirely. Tricky, but so rewarding!”

Let’s talk about your character, who is she?

“Nolwandle is Siphokazi’s niece, sent to work in the Zungu home in Protea. She’s a young woman who finds herself working for a wealthy family she has only ever heard of.

“She now must navigate her way through this new world while trying to balance what this all means for her life. It should be exciting to see how she cements herself and evolves in this new context!”

What lessons are you currently learning?

“I love this question. The most important lesson that I am learning lately is actually something that one of the directors of Isibaya said to me once. He said, “Don’t ever forget that Nolwandle Is real.”

“And that’s a lesson that I will take with me to every set that I will ever be on. I’ll always remember that no matter what role I play, the character I’m portraying is REAL.

“She exists in the real world. I have the opportunity to give her life and movement and personality – not as a caricature but as a real, breathing being,” she said.

What’s next for you?

“I can’t be specific yet but let’s just say, you will definitely be seeing more and more of me!” She said.