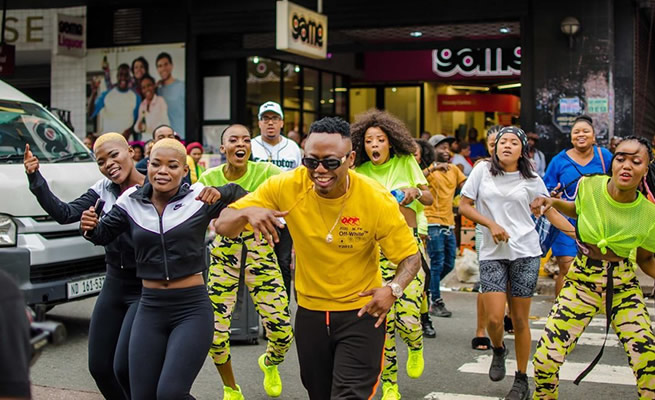 They possess the talent and it only took someone who believes in them, that was the recipe that got the Qwabe twins their first hit – and they’re looking forward to many more.
The popular twins Viggy and Virginia Qwabe hit the ground running following their unceremonious exit from TV singing competition Idols, amid accusations of bullying and mistreatment, but Viggy and Virginia Qwabe (22) have moved on from the drama.

They dropped their debut single, Hamba – featuring DJ Tira – in time for the festive season and the video for the track has received thousands of views.

“Our sound is afro-pop and afrosoul but we don’t want to limit ourselves,” Virginia explained. “We won’t mind doing any type of sound to accommodate everyone.”

LEARNING THE ROPES
The twins have been singing for some time at church and in their bedrooms, but in 2019, they went a notch higher, auditioned for Idols.
“It was an easy decision to make,” Virginia said.
“We’d make so much noise singing at home that our family would tell us to stop it and go try out for Idols,” Viggy added with a laugh.
There, they discovered it was a different ball game altogether, starting with auditioning for four well-known judges, and eventually for an audience, in the full glare of millions of South Africans.
“We don’t want to get into the Idols story but we’re thankful for the platform it gave us,” Virginia said.

They left the show after Virginia was eliminated and Viggy followed. But Idols was an eye opener for them, regarding what it’s like to be an entertainer. While working with DJ Tira did amplified that experience.

“With him we’ve had to learn to get the crowd excited,” Viggy said, “and to control the energy of the performance.”

Also known as Malume Bearings, Tira’s oomph has rubbed off on the twins.

“He taught us to get on stage without any fear and most importantly, reminded us to believe in ourselves no matter what. “We appreciate his motivation and encouragement,” Viggy said.

LOOKING AHEAD
There is still a lot hard work coming for the twins, Tira told Move magazine.

“They can fade away or make it big; it’ll all depend on their focus and how everything goes. So far so good, but they shouldn’t drop the tempo,” he said.
The sisters aren’t signed to his record label as yet. “I don’t want to push them to sign under Afro. I want to give them time to decide.
“I want to show people what I’m able to do. They can decide if they want to go the long way or not. I can still turn people’s lives around; I did it with Big Nuz,” he said.

The twins say they’re still learning the ropes, adding that whatever happens, they won’t stray far – their father, Lawrence Qwabe, who is keeping a close eye on them.

“Our father is a church pastor,” Virginia explained. “He’s very strict and protective. When we leave the house he has to know where were are, who we’re with and what we’re doing. That’s the kind of father he is to us,” she added.

A HELPING HAND
DJ Tira said he would have let South Africa down had he not helped the twins to prove themselves, adding that his love of helping up-and-coming young artists led him to collaborate with Virginia and Viggy.

“Me helping people isn’t about business, it’s more about the excitement and joy in my heart when I see young people winning,” he said.
“When I see a young person bringing food to the table, I feel it serves a greater purpose.

Their collaboration was seamless. They entered the studio ready to make good music.

“He always tells us to bring our A-game every time, and that’s what we do,” Viggy said.

They’ve been offering their best since their experience on Idols. The KwaZulu-Natal-born pair were quick
to steal the show and made fans across the country.

They made into the top five of the competition, but when Virginia was booted out, Viggy decided to pull out as well. DJ Tira said he couldn’t resist a chance to work with them.

Apart from their talent, he was impressed by their impact, how they gained overwhelming support from South Africans.

“I’ve come across a lot of people who are loved but end up being just another number because of not having guidance; of not having the right people to point them in the right direction,” he said.

Despite the inexperience, the twins went into the studio thirsty and ready to take instruction.
“They‘re determined ,” Tira said, “When you have that attitude you won’t go wrong.”

Virginia and Viggy’s debut single is about a broken-hearted woman who’s fed-up with how her man has
treated her. She tells him to go because she’s tired of being disrespected. The twins are still exploring their sound, and aren’t concerned with being known for a specific style or genre.

WHAT THE FUTURE HOLDS
“It’s now or never the next six months will be crucial for them. The truth is that you’re as good as what you did yesterday.
“If the days day go by and you don’t produce something people want to hear, something to excite people, then they’ll soon forget about you.
“You’ll just be another person and go back to square one,” Tira said.
The Qwabe twins are convinced their time has come – and they’re willing to put in the time to make success of o their music career. “When God gives you a dream everything happens along the way.
“When you do something out of love, all things fall fal into place,” Virginia said.
Tira said that if he does sign them to his label they possibly could release an album soon.
He added that the music industry is tricky and that it’s difficult for new artists to stay relevant.
“It’s important that if there’s even a little bit of fame you don’t let it get to you and think you’re secured
forever. Things can go south in a matter of minutes,” he advised.
The twins pointed out that they’ve loved every minute of their journey so far and aren’t about to let
fame get the better of them, they simply want to make the best of the chances they’ve been given.
Virginia said: “The attention and warm welcome from South Africans makes us so happy and makes us want to do more.”