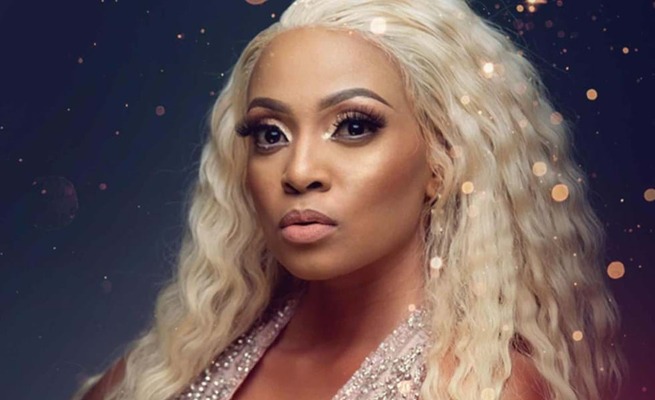 Real Housewives of Johannesburg, (RHOJ)’s Lethabo Mathatho is running a from ‘rags to riches' life, despite living this large, she is still ambitious and determined to achieve more.

‘I love the glitz because I grew up the opposite,’ that is how explains her love for her current luxurious life.

When she visited DRUM magazine offices for an interview, the blonde beauty was driving a burgundy Range Rover, carrying classy bags; Louis Vuitton and Gucci tote filled with clothes from her favourite designers.

“This is how I roll, honey,” she said, breaking into booming laughter.

From her firm, frank, and lively nature, Lethabo “Lejoy” Mathatho ( 34) has always known she was born to be a public figure, born to be prominent, and indeed turned out to be such a person.

Currently she is giving a new lease of life into the second season of The Real Housewives of Johannesburg.
“I’ve always wanted to be on the show. I love the glitz because I grew up the complete opposite,” Lethabo told DRUM.

She was born and raised in Limpopo with her single mom and two siblings, and Lethabo was less privileged, at one time she had to skip school because she didn’t have sanitary towels. That is how tough her life was.

“I knew early in life that I don’t want to live like that. I want the fake hair, the lashes, the cars, the big house. And if you think I’m doing too much, honey, you haven’t seen anything yet,” she said.

Her confident and candid attitude has given her co-stars’ scratching nails to come out on the hit show, but Lethabo is not apologetic at all about spilling tea on wealthy socialites.

“With me, what you see is what you get. I am free, respectful and very outspoken. I just don’t get along with people who disrespect others and who are insensitive.

“Christall [Kay] tends to be insensitive to people’s personal issues, like the time she called babies made through artificial insemination ‘ fake children’ because they weren’t created the conventional way,” she said.

And continued; “I called her out because being on TV means you have a responsibility to teach people – not just entertain.”

Be that as it may, according to her, Christall is not the only reality show star who has crossed hairs with her.

“Brinnette [Seopela] and I also had a bit of tension, but we’ve ironed it out. It’s not that I don’t like Christall and Brinnette, I just like Mrs Mops more,”
Lethabo said.

She and Nompumelelo “Mrs Mops” Mophatlane have become best friends behind the scenes. They spent free time with each other every morning and usually also meet over lunch to talk business.

“Her and I hit it off on the first day we met. I thought I was done making friends at this age, but she won my heart. She is pleasant and the friendship came naturally,” Lethabo said.

Lethabo is not actually a housewife, she’s in a lengthy relationship with her partner, Swedish engineer Pär Thoren. “I’d love to get married and have kids one day. But for now, call me a house partner,” she joked.

According to her, viewers have missed it getting a look at Pär just because he has been living overseas for the past two years, and that has caused her travel a lot, to see him. “Which is why I travel a lot to Sweden, London and the USA,” she explained.

The lovebirds met three years ago at an ice cream shop in Centurion. “I was late for my radio show and wanted to buy ice cream. But he was in front of me and confused about what to get.” She advised him to take a scoop of each flavour. “I was in a hurry and I wanted him to finish. When I paid, I mistakenly paid for his as well,” she said.

When she hurried out, he ran after her and requested for her email address. “He sent me a picture of the empty ice cream tub saying he’s even more confused because they were all delicious,” she said.

That was how it all began, and ever since, they have been together, although he spoils her with some goodies, Lethabo is a self-made woman. Everything she owns has been proudly acquired through her own sweat.

“There’s nothing wrong with couples sharing their wealth but I want to inspire women and young people to dream and work hard for themselves,” she explained her view of love life.

She is determined to to use her role on the show to inspire young people who come from poor backgrounds. “I was able to break the chain of poverty in my family. I built my mom a house, I became successful and I want people to see they can do it too. And I want them to see how I did it,” she added.

She owns a printing company but started out in radio, working at Capricorn FM and Thobela FM. Now that she’s featuring in the show her career on the airwaves has been sacrificed. “I love radio so much, but I’m also enjoying being on TV and the life that comes with being a celebrity – attending red carpet events, dressing up and showing up,” she explained.

She is more than dolling up though, Lethabo loves helping others and does so through her Lejoy Foundation, which she launched in 2012. “This is very close to my heart. I have done sanitary drives because I know the pain of not having your own sanitary towels.
We paint orphanages, give groceries to families and try to help where we can,” she said.

Lethabo's generous nature is attributed to her mom, Anna Mogadi Mathatho, who raised her, her brother Karabo (22) and sister Tokologo (12) in Seshego, Limpopo.

“My siblings are my world. My brother is a pure and utter gentleman. I don’t know where he got this because we were raised by a single mother,” she said.

She also admires Anna, who was retrenched from her teaching job when Lethabo was studying journalism at a university.

“My mom showed me anything is possible. She raised beautiful and responsible children without my father.
“My personality is totally from my mother’s side. She is vocal, strong and just doesn’t take nonsense. My dad was a club DJ, that’s where I get my creativity, my love for music and radio,” she added.

Her parents went separate ways when she was young, and she met her father, Elliot Semenya, when she was 16. “I was so happy to meet him, especially after my mom lost her job because I thought he would come in as a saviour, but he disappeared when I brought up money,” she said.

Painful indeed, Lethabo asked her father for R20 000 to help her pay her outstanding fees, and he ran away. “He left because of R20 000. I spent many years asking myself if he loved me,” she said.

They could not have had an ideal relationship, but Lethabo forgave her father long back, who is unfortunately, now late. “I’m content. I hold no grudges.
I want someone who’s sitting at home to be able to dream that they too can break the curse of poverty – and be unapologetic about it,” she said.