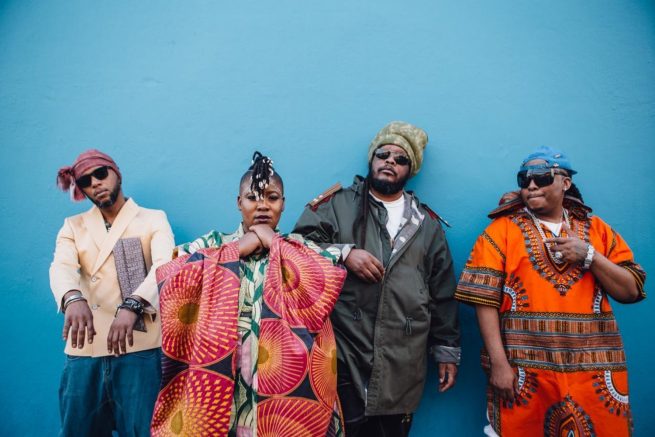 In the gone-by years, they dominated the music scene belting hit after hit for years, not only that, they also knew when to play which song and got fans grooving and on their feet.
The produced chart-topping albums whose theme songs became festive season anthems. From Thathi Sgubhu to Dipendule to The Way Kungakhona, they quickly rose to icon status in the country.

To the pain of their fans, then they parted ways to focus on their individual careers, some people writing them off as a spent force.

They are now back!

Now, two decades after they formed, Bongo Maffin are back and are set to drop their new offering, an album titled ‘From Bongo with Love.’ Band members Thandiswa Mazwai, Stoan Seate, Speedy and Jah Seed still look and sound pretty much the same. If not better with age like wine.

Although they last released a song 14 years ago, many of their fans had been requesting them to get back into the studio. And they have heeded the call.

Following years of merely talking about it, at last the group members resolved put Bongo Maffin on their to do list. The return was marked a performance at the DStv Delicious International Food & Music Festival in Johannesburg a few years ago.

It was just electrifying reminding many of the era gone by, and eventually, they decided they had to return to the studio. According to them, it took a while, but now the time is just right. “When we make music, it is going to be a hit because we have always made timeless tunes,” Speedy, whose real name is Harold Matlhaku, said.

This will be their seventh album, since the New Construction in 2005.

“It took some time to get into a groove with one another. But there is nothing as beautiful as the bond that’s created while making music,” Thandiswa said.

“We stress each other, caring about what we put out. We fight a lot. There are no personal fights, though. It is all about putting out good music,” Stoan added.

They are so equipped in each department, Thandiswa has a legendary Busi Mhlongo tone, Stoan is all about Tswana rap, Jah Seed (real name Adrian Anesu Mupemhi) has a reggae touch while Speedy has a bias towards R&B and Afro-pop.

“Without sounding like we’re blowing our own horns, there has never been a group like us in the country,” Stoan said.

Their timetable this festive season is already filled to the brim. “I am in the music zone, recording, interviews and travelling – just like old times,” Stoan told Move magazine.

In their upcoming gigs, they look forward to performing their new tracks. They’ve already dropped two songs, Gimme Joy and One Africa, which are both on high play rotation.

Gimme Joy, in particular, has a touch of the current amapiano sound that is causing havoc on dance floors.

“I think we have always been current. Sometimes we’ve always been ahead. We were fusing hip-hop into our music way before it was cool,” Stoan added.

Zimbabwe born Jah Seed, said he was extremely impressed by Thandiswa during the making of the song. “It has gone to a level on how to lay down Shona verses,” he laughed.

They attribute their existence to the record label that discovered Bongo Maffin, Kalawa Jazmee, under the leadership of Oskido.

Speedy recalls vividly that at 18, after meeting Oskido at a club, they started ‘hanging out.' “But he didn’t know what to do with me,” he said with a laugh.

On the other side, Jah Seed, all the way in Zimbabwe – was handpicked by Oskido as well after his deejaying, rapping and freestyling at a wedding made an impression.
“We are fortunate to be working with people who are trendsetters at Kalawa,” Jah Seed said.

From Bongo with Love, it can’t really be stuck to one style, it is an experimental style that has made the 17-track album cutting-edge, they told Move.
“We are somehow newbies as well as golden oldies,” Jah Seed joked.

Although moving with the current trends, the album still has a distinct Bongo Maffin touch and trademark to it. “When we created it we had to settle on particular themes [like] love, Africa and in an African rhythm and groove way,” Stoan explained.

In the real Bongo Maffin style, they’ve taken the chance to put forward the African narrative – like with One Africa, which promotes the 'Ubuntu' spirit, denouncing the senseless xenophobic attacks on foreign nationals in SA.
“From back in the day with songs like Siyajabula and The Way Kungakhona, Bongo has been a conscious and Pan-African voice of club or dance culture,” Thandiswa said.

Thandiswa spoke to Move, from Australia, where she was for the Red Bull Music Festival in Melbourne. “It’s crazy, especially with my special show with the Hugh Masekela Band coming up this month in Soweto,” she told the publication.

“Touring the world has been fulfilling,” Thandiswa, aka King Tha, said. She is on a mission, and continues to transform the world through her music and she is convinced it’s her truest purpose.

“All of this success and longevity didn’t just happen. I removed myself from ‘celebridom’ and kept a clear distinction between the work and myself. Another thing was allowing myself to listen and learn from older artists. In those mentorships I was taught to remain authentic to my particular experience,” she said.

Their solo journeys have all been with something to do regarding being aware of the lessons life was trying to teach them. “The good times outweigh the bad times. I have accumulated wisdom.

“Yes, the music is important and purposeful but so is fatherhood,” Stoan said.
He’s always been diplomatic with regards to his private life but told Move, he has children in varsity.
Speedy, on the other hand, admitted there were hard times in the music sector that have taught him to be humble, especially when he went solo in 2000.

“I have learnt that you are going to have people talking negatively about you. I am not fazed, the brand is already made. I mean I was 20 and trying to figure things out,” he added.

‘Being back together is exciting so get ready for more memories,' so they promise.

“If you put good into the world, you will get good returns,” Stoan added