It’s been hardly two weeks since the Jozi pride where thousands of gay people celebrated, but gay internet sensation and performer Bobo has become the latest victim of hate crime. The openly gay teen, whose comedy videos went viral on social media, escaped with bruises and a gash around his mouth and left eye. 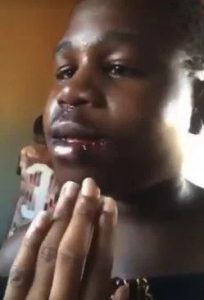 In a video obtained online, young Bobo is heard telling a friend that he would not bother reporting the matter to authorities. According to the footage, Bobo had just finished performing at DJ Bongs’ event held in Durban, KZN when a group of unidentified men allegedly attacked him for no reason.This was a hate crime assault driven by his sexuality as the men allegedly approached him unprovoked.

When called for comment, DJ Bongs said he was shocked because Bobo is not a violent person. However, he said he couldn’t get involved in this as he did not witness the incident.

“I don’t know anything. He never told me and he has my number. Yes he did perform at my gig and if he was attacked why did he not tell me? I suggest you ask him because I can’t comment on things I don’t know about or did not witness,”