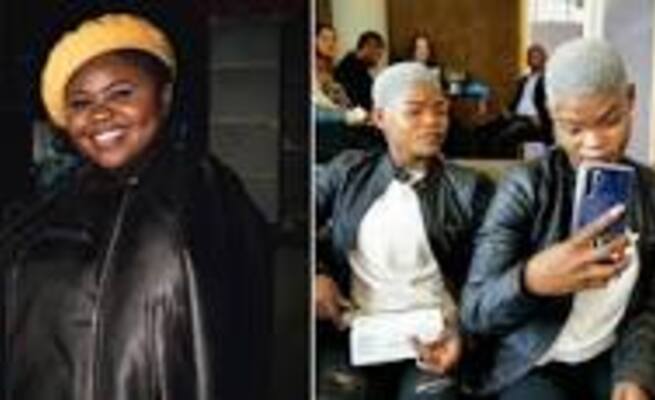 In a stunning twist, announced on Monday, both Qwabe twins left Idols SA. In the latest episode of the reality singing show – which aired on Sunday – Virginia Qwabe was eliminated after not receiving enough votes.

Then, Mzansi Magic announced that her twin sister, Viggy had decided to withdraw from the competition.

Rumours then swirled, on Twitter and Facebook, that there was more happening behind the scenes of the show, that ultimately caused the second twin's dramatic exit.

In an interview with former entertainment journalist and television producer, Nicky Greenwall, Hlomla Dandala mentioned that in most cases the off-screen drama is a lot more meatier than the actual show.

One is reminded of this statement after rumours of heavy drama that is said to have been brewing at the Idols headquarters. Twitter was set ablaze when season 15 Idols contestant Snenhlanhla Sneziey Msomi was the trending topic.

The 25-year-old hopeful was alleged to have been the real reason behind Viggy's sudden exit after her twin sister got eliminated on Sunday.

According to these rumours, Sneziey has not been kind to Viggy and Virginia Qwabe during the course of the competition. Snark remarks such as being likened to a man were allegedly thrown at the twins on certain occasions.

Seemingly, the rumours have no real weight as Sneziey and Mzansi Magic have since denied any allegations of bullying and mistreatment towards the Qwabe twins.

To quell the torrent of fan theories Mzansi Magic and Idols SA released a statement – via Philly Kubheka HOD PR & Publicity Local Entertainment Channels – stating that there was "no bullying or any physical altercations among the contestants in the house."

.@MzansiMagic and #IdolsSA would like to state that we are aware of fake accounts that are posting as the contestants which have been reported to our Anti-Piracy team and that THERE WAS NO BULLYING or any physical altercations among contestants in the house. #IdolsViggy

Some of us believe in you, 2e still defended you before the official statement from @IdolsSA

We will forever stand by you, just focus girl, keep your eye on the price and we will do our part aswell 💯#Viggy#Somizi#Sneizy#IdolsViggy pic.twitter.com/MTMzaksJWG

A Twitter user was quick to post a video of another eliminated Idols hopeful, Melanin Zwane. In the video, the 20-year-old rising star can be seen crying and relaying her story of being mistreated. Many Tweeps believe that she was referencing Sneziey and her close friend, Mmangaliso Gumbi, who has since been eliminated not too long ago.

#IdolsViggy I believe this bullying story. Sneziey made melanin cry during group stages. Remember how she was even telling her how to end her opening to the songs?

Below are just a few mixed reactions regarding the topic at hand:

#Sneizy wasn't she the one who wrote a whole 10pages about being bullied because she was fat🙄 kanti she is the biggest BULLY….. *Literally*🤫🤭.

And also wasn’t #Sneizy part of the Malanin saga at Theatre week too… I mean one bullying incident can be a fluke but 2… sounds like too much of a coincidence to me… pic.twitter.com/iNWL59L5X7

There will be no contestants eliminated during the next episode of the highly popular show.