PRODUCTION on Mzansi Magic’s Igazi is due to start today but lead actress Vatiswa Ndara will not be on set.

Vatiswa, who played NomaRussia, revealed this in a six-part open letter to Arts and Culture Minister Nathi Mthethwa.

Also not returning is the late veteran actress Nomhle Nkonyeni who place the role of Nomzuzu.

She died at the age of 77 in July this year after short illness.

In the letter, Vatiswa wrote that her spirit was broken as artists were not respected or properly paid. 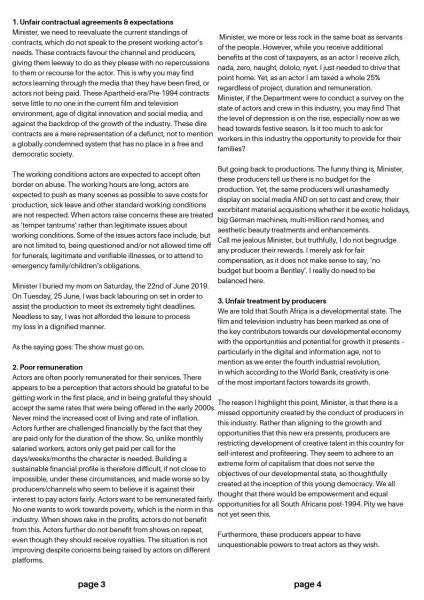 Vatiswa said she wrote the letter after being offered R110 000 for a five-week shoot by production house, Ferguson Films.

According to the contract, she would have to be available at all times and for fitting and makeup tests ahead of production.

Vatiswa said she rejected the offer as there was no guarantee she would receive residuals, she would not be able to look for other work until the contract was over and she would not be paid for her time when going for fittings, attending public relations events or media interviews.

She said the contract required limitless calls, which meant she could be expected to be on set for up to 12 hours a day from Monday to Saturday.

Here lies the remains of Vatiswa Ndara’s acting career that died on 07 October 2019.
Good luck @theVati_Can as you pursue a career in engineering, teaching or whatever…it’s been real boo! #RIP https://t.co/aydkfq0TgX

Minister Nathi Mthethwa responded to the letter on Twitter, writing: “Good day Vatiswa, thank you for taking the time to write this letter. This is to confirm it has been received.”

His spokeswoman, Asanda Magaqa also said in a Tweet: “Please know the minister already has long standing engagements today, so please allow him time to consider the contents of the letter and respond.”

Award-winning actress Vatiswa Ndara (@theVati_Can) who penned an open letter to the Minister of sports, Arts and Culture to voice her concern on the issue joined us in studio.#NewzAtPrime #Newzroom405 pic.twitter.com/jZSseO9YUA