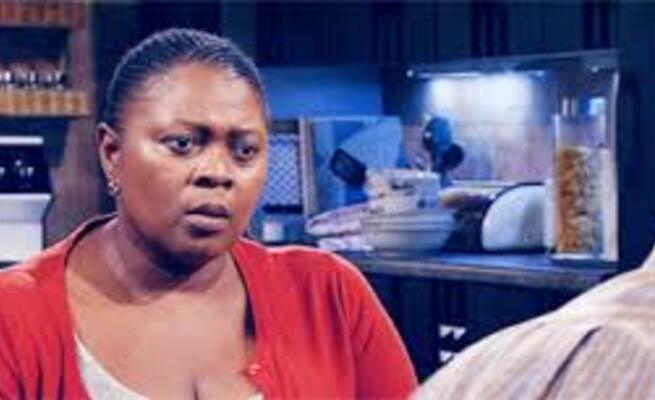 It’s a case of art imitating life. On Scandal! Zinzile and Mlungisi Ngema played by Gcina Nkosi (48) and Patrick Mofokeng (49) are an admirable married couple that are loyal and mutually respect each other.

They are also good parents who encourage their children to fulfil their dreams. But their relationship takes strain when Zinzile broaches the subject of going back to university and furthering her studies.

He dismissed the idea as ridiculous, but the determined wife went ahead and applied and to her surprise, was accepted. Not wanting to upset Mlungisi, the submissive Zinzile did her assignments behind her husband’s back.

He eventually found out and it led to a big fight, which ended up with Zinzile moving out of their marital home.

Gcina tells Move! the storyline was a little too similar to her family as her mother went through the same hardships when she wanted to study further. It was a painful memory to relive while playing Zinzile.

DETERMINED TO MAKE IT

Gcina was born in Umlazi in KwaZulu-Natal and raised by her mother and grandmother. Her father was involved in politics and spent years in prison. He passed away shortly after being released from prison in 1987.

Gcina is the youngest of six children and her mom was a cleaner at a factory and a site steward. “My mother was intelligent and wanted to acquire a tertiary qualification and wanted to make something of herself, but my dad did not allow her to pursue her dream of being an educated woman.”

When they started shooting this storyline, Gcina started to miss her mom who died in 2007 after a short illness. “I remember what she went through and how that had pained her. She told me exactly what my father had said to her when she had told him about her intentions to go back to school.

He said to her, ‘I don’t want you to do it. You are my wife, my property and you will do as I say,’” she recalls. This is why Gcina was determined to make it when she started studying.

After her first year at Durban University of Technology (DUT) studying drama, she had to quit due to financial issues. But she didn’t give up on her dream to become an actress and kept auditioning for roles in plays until the doors opened.

It’s been 10 years since she joined the cast of Scandal! in 2009 and she’s been on the TV soap since.

STANDING UP FOR HERSELF

Even though Zinzile is a good wife and usually submissive, she is for the first time standing up for herself. She chose to separate from her husband in order to continue with her studies, leaving the family in a compromising situation.

Zinzile is now living with a friend but still goes home to prepare dinner for her family and see their daughter before her husband returns home.

During the Easter holiday, Zinzile’s niece whom she and her husband had taken in as their own, came home from university and the Ngemas had to put on a show. It however didn’t take long for her to see there was something wrong.

The couple had to come clean and reveal their challenges and living arrangements to her. Gcina says she believes in women’s education. “If you don’t follow your heart you will spend your life regretting it.

Do not over value your partner’s opinion over your own. If he loves you he will support you and put your happiness first, not discourage you. It is also better for young people to study first and get married later,” she advises.

“I admire Zinzile for fighting for her dreams, because dreams are important.”

THE RIGHT TO EDUCATION

Jennifer Papers, counselling social worker at Family South Africa in Johannesburg, says it was a cultural and social norm to have women stay at home as housewives and mothers “barefoot and pregnant in the kitchen”.

However, in recent years more and more women have become career orientated. “This has caused a shift in gender role definitions and the way women are perceived in a still very patriarchal society.

For some husbands having their wives go back to school might mean a shift in power and control,” she says. “Society has placed an expectation on men to be the providers and women as nurturers.

For many husbands’ having their wives go back to school might mean not only a neglect in household duties and child rearing but also a great shift in power dynamics.”

According to Jennifer, the constant push and pull in modern day power dynamics has caused breakdowns in many families and marriages. For women having access to education and equal opportunities in the workplace has made them liberal, confident and independent.

However, the transition is still very difficult for many men who are raised to marry a wife capable of taking care of household responsibilities.

“A wife returning to school may seem taboo with a concern that the husband will have to tackle some of the household duties meant to be performed by a wife.”

WHERE THERE IS A WILL

If couples really want to resolve their issues and preserve their marriages, they can overcome this hurdle. Jennifer says marriage counselling is always a good platform for resolving conflict in any marriage.

Here roles and responsibilities can be discussed and how we can share these in an everchanging society.

“Modern day society with its turmoiled economy has forced women to return to school in order to climb the work force ladder and become productive contributors to their households,” she says.

“A wife furthering her education should not be seen as a threat to her husband but rather an individual empowering herself for the growth of the family.”

A woman can have it all, Jennifer believes. There’s no need to sacrifice dreams, with good time management and support from your family, it’s all doable.

And Gcina agrees. “Remember that no man is an island and therefore you should never be fearful or ashamed to ask for help when the need arises,” she says.