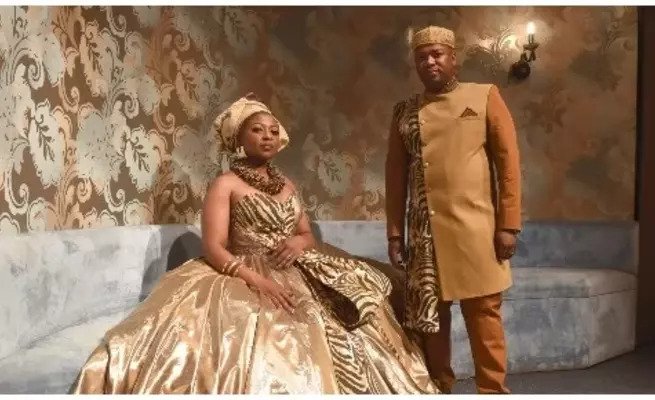 The long wait is now over, Generations: The Legacy’s Lucy Diale (Manaka Ranaka) and her long- time boyfriend, Mrekza (Kope Makgae), are getting married with a wedding that is expected to be eye-catching in front of their friends and relatives.
As if for the sake of showing-off; Mrekza wants it to be out of this world, red carpet, live band, real and fresh flowers, among other things are what he is dreaming of. He also wants the wedding catering to be done by a celebrity chef.
In sharp contrast; the bride would have been okay with a simple one. But, she will let it be, to her husband’s taste, his dream wedding. Move magazine got a look at the drama.
THE PROPOSAL
At one time Mrekza seemed not concerned about get married or taking Lucy for a soulmate.
Sometime during the course of their relationship, the pair were once not to talking terms, and
had broken up a few weeks ago.
He however, noticed how difficult it was for him to cope with life without his girlfriend and how much she loved him, the businessman re-traced his footsteps and proposed to her.
The proposal, Mrekza’s idea was to take her by surprise, he wanted to propose to her in a
restaurant full people cheering on them, but when they visited the restaurant, Mrekza found
out that he had made a reservation for the following week. No place for them.
Instead, he did it in the parking lot. Lucy was caught off guard, she loved it, and she agreed,
though she did not wanted to get married.
“Lucy didn’t want to get married,” Manaka explained: “If it was up to her, the wedding would
have been a small, intimate affair, but Mrekza wanted the whole thing big.
For Lucy, it was a cherished dream, to be with him again.
“If there is one thing she is excited about it’s being with him.
“Because of her stubbornness, she could have easily demanded a small wedding but this is
what she decided to sacrifice for him and their love,” added Manaka.
Their wedding is a two-day affair, she was almost upset to notice that Mrekza is nowhere to be found on the morning of the white wedding.
He enjoyed the bachelor party a little too much but finally came, to Lucy’s relief.

As drama may has it, just in time the pastor asked if there was anyone who did not want the
marriage to proceed, Mrekza’s ex-girlfriend, Hope, walked in. Thank God, she just took a seat
without any disruptions.
As if that was not enough, Lucy’s daughter, Lesedi (Luyanda Mzazi), showed up at the wedding heavily pregnant.
The unsettled teen was sent to the Eastern Cape to stay with family. At that time, she had not yet told her then-boyfriend, Crazy J, that she was carrying his child.
Lesedi joined the wedding celebrations undercover in a big hat and dark glasses to avoid being noticed.
Is she here to stay?

What a night!!!! What a WEDDING! Lucy and Mrekza are finally MARRIED #GenerationsTheLegacy 🎉💃🔥🥂💍


MOMMY DEAREST
Manaka (40), a mother of two who was raised by both parents, is a strong believer in love,
faithfulness and marriage.
“I don’t think people should be getting into relationships if the ultimate goal isn’t marriage.
“Couples should stamp it down for the sake of the children. Whose surname would the children
take if the parents aren’t married? I don’t want to live with any man if he isn’t my husband,”
explained the actress.
As for relationships, Manaka wishes for someone who truly loves her, and she cannot settle for anything less.
“Anyone can say ‘I love you’ and not even mean it. I believe our sixth sense can tell when
people are being genuine towards us and when they are not. It is just a matter of paying
attention and following our intuition.
“I also don’t compromise on loyalty in a relationship. If he is loyal the chances of him cheating
are very slim and chances of him prioritising friends are also slim. When I have a gig and my
baby daddy can stay home with the kids that, for me, is the true definition of loyalty. What
more can I ask for?” She said.
Manaka further explained the current situation;
“This one is complicated. We dated a long time ago, had a child together and broke up because
things didn’t work out. Ten years later we got back together.”

The bride in all her glory! 😍🔥 A huge shoutout to our wardrobe department 👌🙌 The wedding reception continues, tonight! 💃💃💃 #GenerationsTheLegacy

MR COOL
Love is something Kope doesn’t take for a ride . The actor and musician is in a good relationship with Mpotseng. The couple have twins, son Zoyl and daughter Zoey, who are turning two years old.

Did you miss Lucy and Mrekza's wedding? Catch the omnibus today at 11AM on @mzansi_fosho #GenerationsTheLegacy 💃🎉😍

“I am in a good relationship where I am appreciated and respected,” he said. “Love, family and marriage are a calling. It’s important to find somebody who matches your vision and has the synergy and understanding about  where you are going.
“You can love everyday. Love is a condition. Anyone can fall in love but it takes wise and patient people to forge love and marriage,” Kope described Mzekza as a cool guy.
"He started from the bottom, and made his way in life. He brings life to the serious nature of
the story. He will make a good husband,"; he said.