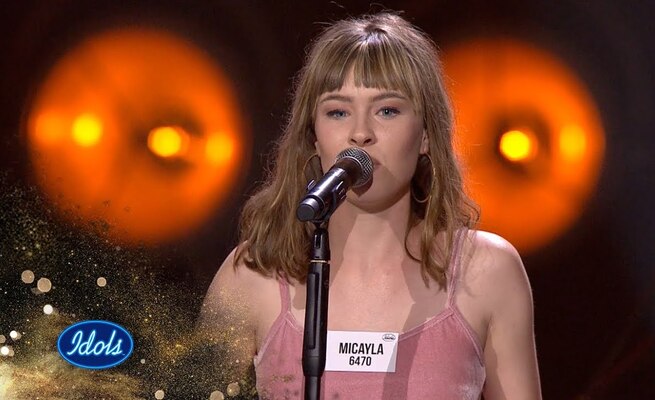 Misery, unhappiness, sorrow, gloominess, dejection, and despondency, was what Idols finalist Micayla Oelofse felt, her spirits were at all time low, but fortunately music saved her.

The circumstances with regard to her safety or well-being, were all staked against her, it was so bad that she quit school and it was further compounded by losing her mother a few months later.
It was when she came on stage that the treasure in her came to the fore she illuminated the platform with her sweet vocals, she impressed the judges from the beginning and was the first contestant to make it to the top 17.
Oelofse, who hails from Port Elizabeth in the Eastern Cape, was convinced her mother's spirit played a part in her securing a slot.
Oelofse said like mother like daughter, her mom also suffered from feelings of severe despondency and dejection.
Micayla, (18) had to quit school in February 2019 as a result of the depression, as the condition exposed her to bullying by other children. She is this year’s youngest contestant, and has just made a name for herself by showcasing her talent.
For her going back to school, is no longer part of her plan. She is prepared to pursue her musical career, which she describes as her true calling.
“I entered the Idols competition because it felt good, it felt like I had a much better thing to do with my life and it’s all thanks to my father and my late mother,” she said.
Her parents had noticed the treasure in her, even before she was that much into it: “It was them who secretly entered me into the contest. They just said that I needed to sign some documents and I did that without
hesitation because they are my parents, they never told me that they were entering me for this competition, I
only knew when I was asked to go to the auditions,” she added.
Micayla, was diagnosed with depression two years ago, and she said the condition took a plunge for the worst
when she lost her mother in June. She even contemplated pulling out of the contest.
She was however, overwhelmed by the desire to honour her mother’s efforts of enrolling her for the
competition, she shelved the idea of throwing the towel in, and continued.
“My mom was a singer. She would sing wherever and whenever she got a chance to do so, all until she was diagnosed with depression,” she said.
She is expected to shine again as the contest reaches the fever pitch, Micayla will be singing for a slot in the top 10.