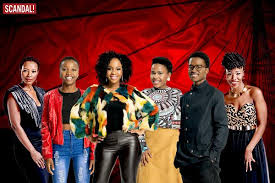 Watch ‘Scandal’ this week as the drama unfolds.

A new presence in the invalid’s life proves to be a far bigger threat to him than she seemed. Quinton and Yvonne continue with their secret plan and Dintle’s increasingly suspicious. Mlungisi sinks even lower and risks losing more than just his pride.

The invalid’s new care-giver turns out to be a wolf in sheep’s clothing. Yvonne and Dintle clash over a man. Mlungisi’s downward spiral causes him to get injured.

The invalid engages in a bout of self-harm, but to what end? Quinton orders Dintle to stop prying but she has her own ideas. Lindiwe is at the end of her tether.

Chumani finds out that someone has been tampering with the company accounts. Neo gets closer to finding out who is stealing from him. Zinzile makes a decision.

An innocent person is arrested while the guilty party realises his time to act is running out. Gloria and Caiphus clash when she discovers he has been offered the job she is after. An estranged family is reunited under the same roof, but is it only a temporary arrangement?