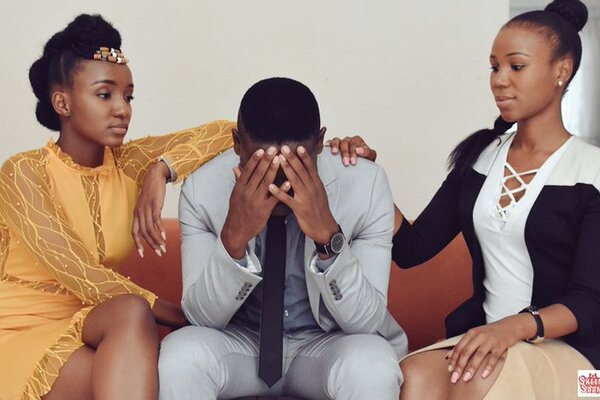 Glenda's heartbreak at the hand of Kwaito has been looming for a while now and even though Skeem Saam fans knew that the moment would shatter Glenda, they only realised on Tuesday evening how heartbroken it left them.

Kwaito, who promised Glenda the world and the stars, started cheating on her some time back with his "friend" Lizzy. He slowly began treating Glenda like trash and didn't have the guts to break up with her because of all the sacrifices she had done for the sake of their relationship.

Like that time she turned down a huge international scholarship, just so she could be closer to Kwaito. Even though fans always expressed that Glenda was naive to pull such a move, they hoped that the relationship would be worth it.

Then Kwaito went and started cheating!

Tweeps were in their feels over the break up. For some, Kwaito's trashy behaviour was hitting too close to home for them, especially when this part came:

Glenda: "You are dumping me?"

Kwaito: "No! Dumping is a very strong word.. But I want you to know that you'll always have a special place in my heart…"

Yhu… tweeps were finished! Poor Glenda is only left with regret, while the new graduate and his doctor best friend-turned-girlfriend ride into the sunset.

They had just the memes for the moment.

So vele kwaito was pushing the course with Glenda. #SkeemSaam pic.twitter.com/eJe1iUpcTA

Imagine being dumped after you called him with your airtime… Shame Glenda.. #SkeemSaam pic.twitter.com/tR6IYCDWq6

#SkeemSaam
Glenda uzaba strong, being dump is not the end of the road, but the most valuable lesson in the relationship department. Vuka sisi ugeze, ubangene! pic.twitter.com/dO3DynWLhr