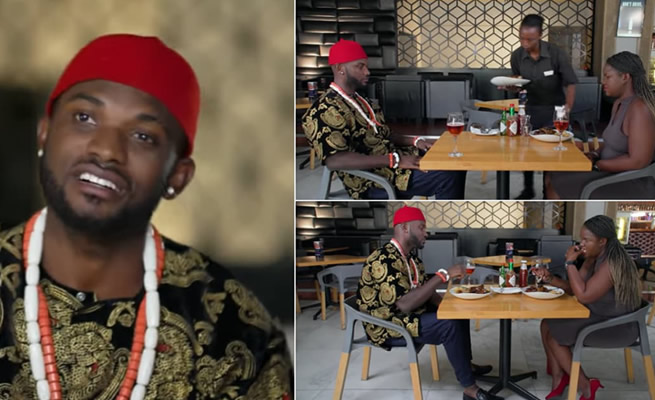 Date My Family bachelor, Arinze Okafor has apologised for his unbecoming behaviour on the Mzansi Magic show.

Okafor, who is also a musician, told Sowetan that he was disappointed after watching the Sunday episode that angered many people.

The Nigerian national who has been in the country since 2015 was perceived as “rude” and “disrespectful” on social media.

Okafor said after reading comments on social media, he felt the necessity to explain himself. He revealed that he did not go to the dating show because he was “looking”.

The singer, who is itching for a big break, said he wanted to launch his brand as an artist and has realised that he did it the wrong way.

Going by stage name Don Smiler, he has an SA girlfriend. His comments were further confirmed by a maroon high-heeled shoe for women that was spotted by viewers in his closet.

“I spoke to my girlfriend and explained the intention that it was for the career. I want to break into the SA market.”

Okafor adds: “I felt bad that my comments rubbed people up the wrong way. It was not my intention. I am neither disrespectful nor rude. I have so much respect for women.”

He also blamed the editing of the episodes which he said in some instances he was quoted out of context. Okafor also denied further accusation of being a player after showing interest to one potential date’s cousin.

“I am not a player. I was just keeping the conversation going. Honestly, I was not serious about everything I said. I know all the people I met during the shoot could be my fans tomorrow,” he said.

Okafor also denied that he showed signs of a disappointed man when he met his potential date.

“I liked her though she said she was disappointed because I had a tattoo. I explained everything later to her.”

On why he referred to the mother of one of the potential date as a “slay queen”, Okafor admitted that he made a mistake.

He said that he was not aware that the term had a derogatory meaning. Slay queen is slang for a young woman who uses glamour to impress rich men for financial gain.

“When they explained to me I was disappointed and I felt bad. I’m sorry to the family and to all people. I honesty did not know. I thought I was commending her beauty and class.”

“Date My Family is shot 6 months ahead. Part of screening before anyone goes on the show is to ask if they are in a standing relationship or not. Once the candidate has picked a specific date, we as channel have supplied our audiences with what is an entertaining yet light-hearted narrative for all families to enjoy on channel 161.”