The sudden death of singer Nichume Siwundla has stunned many fans and fellow musicians,

Mobi Dixon, who's real name is Mabi Ntuli, is being accused of being the reason Nichume committed suicide.

Even though the song Bhutiza was a chart topper, the tweets reveal that Nichume was being 'exploited' by Mobi.

It is claimed that she was getting paid a little over R3000. However, it is not clear if this amount was paid weekly or monthly or once off. 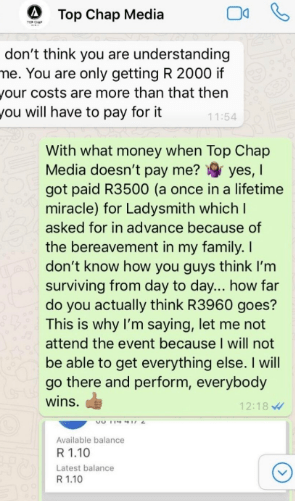 Apparent Whatsapp screen shots of the singer asking for her money from Top Chap media owned by Mobi Dixon have emerged and have left many people shook and in disbelief. 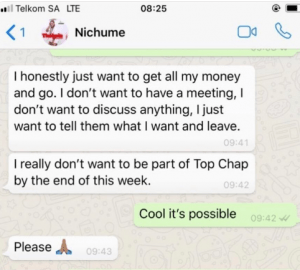 Top Chap Media has responded to these accusations saying they are aware of what has transpired and will issue further communication after the funeral.

Nichume's Funeral will be held in East London, Beacon Bay on Saturday, June 15.

According to the tweets, it is Nichume's family that has released this information.

Nichume did not want to be part of Top Chap anymore, the media company would only give her a budget of R2000 for attending the SAMA's.

Nichume never received a single cent in royalties yet Mobi Dixon is able to buy an expensive Mercedes Benz Viano with royalties from songs that Nichume Siwundla stars in.