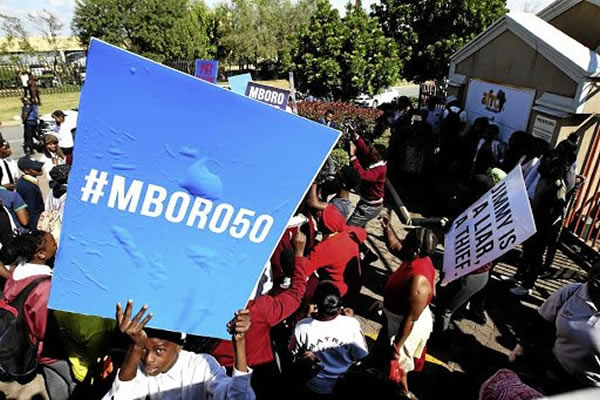 School pupils in their uniforms formed part of a mob which stormed the Midrand offices of the Afro World View (AWV, formerly ANN7) as they demanded the return of Pastor Paseka Motsoeneng's TV show.

The Incredible Happenings was cancelled from the line-up of the relaunched television network owned by businessman Mzwanele Manyi.

The protesters threatened to burn the TV station's head office to the ground if their memorandum handed over to Manyi did not receive the desired results.

Bishop Lehlohonolo Ntamo, who led the protesters, said Mboro – as Motsoeneng is also known – had a right to access the media to present his show.

About 100 learners descended on the former Gupta-owned news network ANN7 – rebranded as Afro Worldview – in Midrand to hand over a memorandum of demands on Thursday.

Community members said they were outraged that The Incredible Happenings Show was not aired on Sunday, as promised.

“We demand answers as to why there was no show, as a whole lot of programme activities were promised. We will go in large numbers, hundreds of us to express our disquiet with no other intention but to get answers,” said Lesego Matseke in a statement.

Cosas was supposed to feature on the show on Sunday.

Religious leader Bishop Lehlohonolo Ntamo told The Star that viewers were saddened when it was not screened.

“We switched on our TVs at 8pm but we never saw Mboro’s show. We couldn’t understand why ANN7 was doing this. Mboro gives back to the South African people,” Ntamo said, adding that the show was a vehicle to stay abreast of the church community’s programmes in Ekurhuleni.

“This is what the people want, and not what Mboro wants,” he said.

They gave the network seven days to respond to their demands, which included a public apology from the management of Afro Worldview and a full refund of every cent paid to the station.

Ntamo said the motive for calling learners to participate in the march was because they were among the people who benefited from the show.

Mboro said he had nothing to do with the planned picket, but was aware that the community were unhappy that the show had been canned.

“What I can confirm is that I will be holding my own media briefing on Sunday. I will be fighting the legal route,” said Mboro.

Afro Worldview chief executive Mzwanele Manyi received the memorandum and said he was appalled at the manner in which the learners and community had stormed the premises.

The network boss told the learners the show did not meet the news agency’s editorial policy and thus would not be aired.

“We tried to make the show work, but it was impossible for it to continue. If we had continued with it, it would have meant that MultiChoice would have been allowed to remove us with immediate effect. So we could not proceed,” he added.