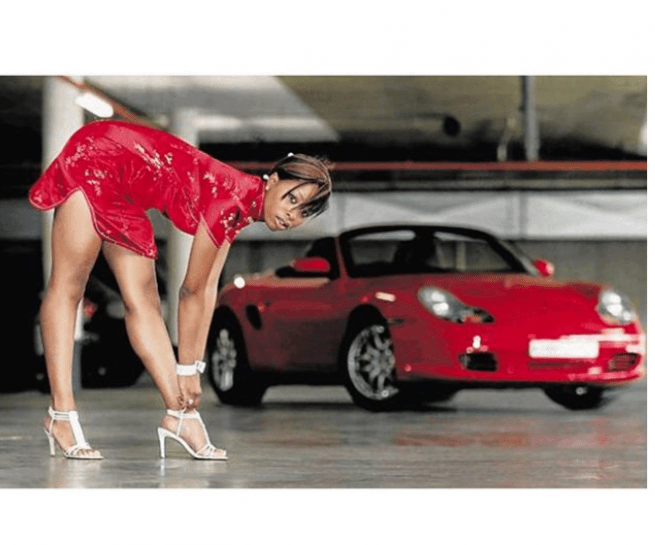 Khanyi Mbau, went from being called a gold digger, to being the pioneer of the blesser and blessee 'agreement" to being a slay queen. And although she no longer sees herself as a slay queen, she's definitely still slaying but in the "I'm the boss" kind of way.

Khanyi Mbau has made a name for herself in the Zaleb world as an actresses and we've seen it in projects such as Red Room.

It's clear to see that Khanyi is now the one calling all the shots in every aspect of her life and she's reaping what she has sown with a shinny new toy.

Her reward came in the form of yet another (yes another, because it's a collectors item) luxury ride – a bright yellow Porsche.

he actress took to social media to share the joyous moment with her fans and followers and she looked ridiculously happy and who can blame her-yellow is the colour of sunshine. So honey, let the sun shine in.

The TV and radio personality showed off her new Porsche GTS on Instagram yesterday, dedicating the purchase to her fans who stood by her side throughout the years.

For the Mbau Nation that stood by me through every fall.

The Red Room actress added that she chose the car in yellow "as a throwback to our power days as a reminder of how far we've come", referring to the matching yellow Lamborghini's she and ex-husband Mandla Mthembu had back in the day.

Do you remember the time? Humble beginnings.

Who knew it would be the beginning of the story behind the 'Porshe collection".

We're just so happy to see that she's setting the bar all the way to the heavens for herself. Investing in yourself is a major #selflove tag and although we can't all be at the car dealership buying a Porshe-there is certainly room for potential.