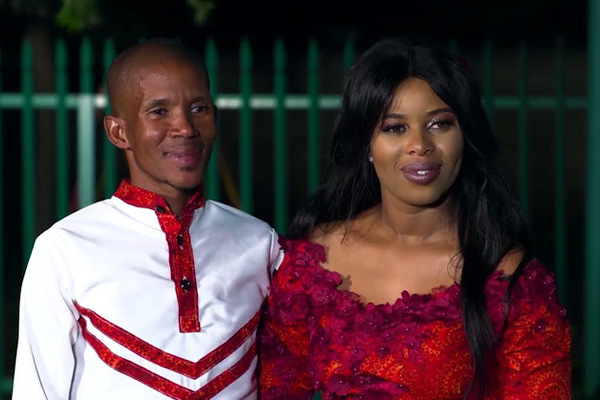 While it's love at first sight for many, for Sebata and Morakane it was pizza that sealed the deal, and that was just one of the unique elements of their perfect wedding that set Twitter alight.

Fans of the reality show, Our Perfect Wedding, couldn't believe their ears when they heard makoti talk about how her hubby, then her potential boyfriend, could afford to buy pizza in the middle of the month.

"Even in the middle of the month, he was able to buy me pizza. I was impressed … I also really love pizza," Morakane said before she laughed.

Eventually the two dated and Sabata didn't want to wait too long to say I do, as they had already known each other for 10 years.

Twitter was still stuck on the pizza story, until the bride revealed she had no entourage (but still expected them to come peel veggies at her house).

However, tweeps lost their minds when they realised Morakane's vows were from the movie, Madea's Family Reunion.

Sure glam squad was like “tjo! She’s can’t allow us to be bridesmaids but expect to be peeling them veggies – asizi 🗣#OurPerfectWedding pic.twitter.com/c6IduIRvcS

She even copied the emotions from Madea's family reunion 😂😂#OurPerfectWedding pic.twitter.com/XQ7CNiFy7h

Girls out there are getting married for the second time while yours truly hasn't even been married once #OurPerfectWedding pic.twitter.com/1fhxuy6GJo