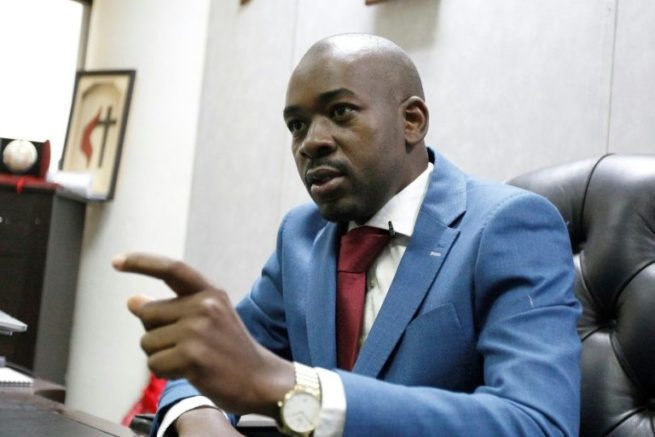 Zimbabwean opposition leader Nelson Chamisa of the MDC Alliance listens to participants during a prayer as part of a meeting organized by a coalition of Christian churches to facilitate dialogue between political party leaders .

The MDC has countered that the ruling is an attempt by the ruling Zanu-PF to destabilise the opposition.

A Zimbabwean High Court judge has ruled that MDC leader Nelson Chamisa is not the legitimate president of his party.


Justice Edith Mushore in a summary of her ruling on Wednesday said the appointment of Elias Mudzuri and Chamisa as vice presidents of the MDC were unconstitutional, and therefore, null and void.

“The appointment of the second and third respondents as deputy presidents of the Movement of Democratic Change party were unconstitutional and, therefore, null and void,” Mushore said yesterday.

“The appointments of second respondent as acting president of the Movement for Democratic Change party were unconstitutional and, therefore, null and void.”

The ruling also said all appointments and actions by Chamisa in his capacity as deputy/acting or incumbent president were illegitimate.

“All appointments and/or assignments and all actions of the second respondents in his purported capacity as deputy/acting or incumbent were unconstitutional and, therefore, null and void” read the ruling

The court has ordered the party to convene an extraordinary congress within a month using the 2014 structures.

“The first respondent be and is, hereby, ordered to hold an extraordinary congress after the lapse of at least one month after the date of this order,” the ruling further read.

Before that, Thokozani Khupe had been the only VP, after she was elected at the party’s 2014 congress.

Khupe has since left the Chamisa-led MDC, arguing that she is the legitimate president.

“We fundamentally disagree with the judgment. The choice of leaders of any political party the world over is the sole preserve of the members of that party,” he said at a press briefing at the party’s headquarters after the ruling.

“It can never be a judicial process. Equally, the actions, activities and programmes of a political party, being a voluntary organisation whose existence is protected by the constitution, is the sole preserve of the members that party.”

Mafume said the judgment was part of the Emmerson Mnangagwa’s administration to destabilise the MDC.

“We are fully aware of the machinations and strategies being deployed by the Mnangagwa administration to destabilise and destroy the people’s project,” the MDC spokesperson said.

“We reiterate that Emmerson Mnangagwa is illegitimate and no amount of diversionary tactics will change this fact.”

The judgment comes a few weeks before the elective congress set for 24 to 26 May, and with nominations already done, it means they are also null and void.