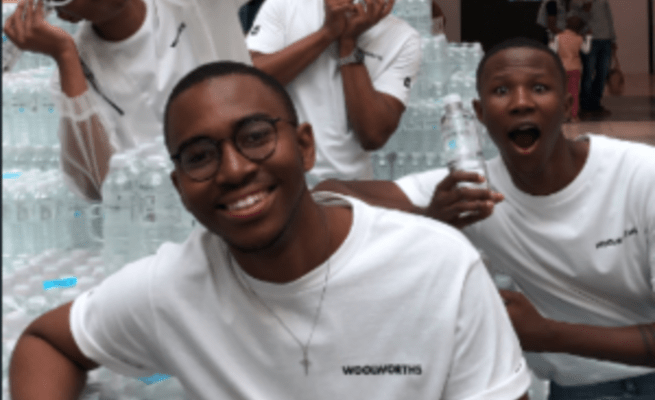 It was the video that momentarily brought the country together in laughter.

A group of four students created a video about the effects Woolworths Water has on one’s accent, articulation, and grammar – and it went viral.

Although the video led to Woolworths contacting the students for a partnership and many social media users buying their own bottles of spring water, Woolworths maintains the video had no effect on their sales.

Marketing Manager at the Woolworths Corporate Press Diane Peterson tells Drum that the #woolieswaterchallenge video was incredibly funny and gave Mzansi a great laugh so they had to meet the guys behind the video.

"We hosted the gents at our Woolies offices in Cape Town last week to brainstorm and articulate exquisite opportunities to amalgamate," Diane says.

"We are very excited following those sessions and as a starting point, we have agreed on a campaign for World Water Day this week," she adds.

Diane says, although the video had the entire country laughing, everyone’s participation and the video itself had no impact on the sales of Woolies water.

"Our sales were all still on target. The video did nothing for our sales. There was no increase in water purchases," she says. "But we can all agree that it truly united South Africa through laughter."

The guys dubbed the 'Woolies Water Boys' will be hosting a water event at the Mall of Africa on Friday March 22, 2019 handing out water while highlighting our water saving efforts through our LoveH2O fund.

"They will also be activating this campaign on their social media channels and will be wearing our RE: jeans which are water conscious."

Watch the video that had the whole country break out in laughter: