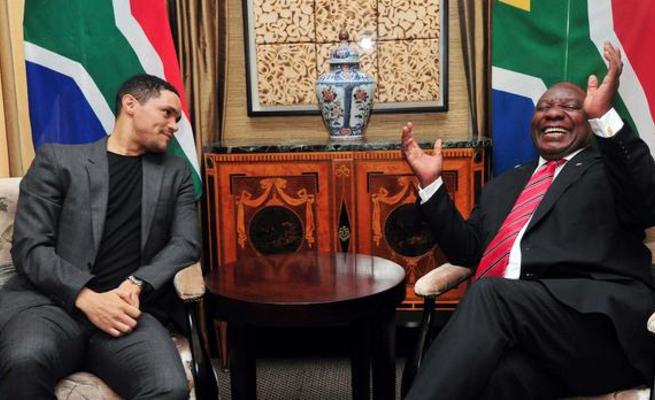 It was all smiles and jokes when comedian Trevor Noah popped in at Parliament on Thursday and paid a courtesy visit to President Cyril Ramaphosa.

Years ago, when Trevor was an up and coming comedian and Ramaphosa was at the helm of Shanduka, the two would meet-up often.

Often, Trevor was the MC at Shanduka events which he and the President joked about when they reconnected.

A proud Ramaphosa tells Trevor that the whole nation supported him when he moved to the USA to host "The Daily Show" and that "the wind you’ve been feeling behind you is us (South Africans)."

Trevor responds later by joking that it hosting the Shanduka functions that prepared him to host late-night talk show.

The pair then casually chatted about how Trevor can go about voting in the 18 May General Elections when he is abroad.

Trevor told the President: "I’m asking them (Americans) how to register overseas. I also need to learn, then I’ll learn and tell everyone."

His Excellency President @CyrilRamaphosa has a courtesy visit this afternoon from one of South Africa’s biggest exports, comedian @TrevorNoah, ahead of his oral reply to the National Assembly in Cape Town, Western Cape. #RamaphosaQandA pic.twitter.com/JmW1k7WEGt