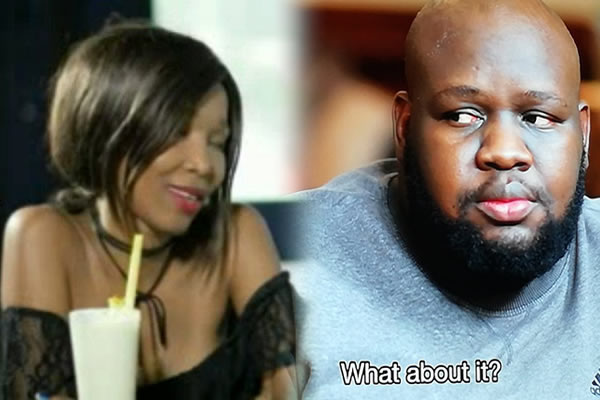 Cleo may have started a thunderstorm on these social media streets with her "rude behaviour" on Sunday night's episode of Date My Family, but don't come for her because she is ready to snatch weaves and take down haters.

Cleo was just one of the potential dates bachelor (and Rick Ross look-alike) Neo had to choose from. And to the internet's surprise, he chose her to go on a date with.

But it soon turned into a horror movie with Cleo's spicy tongue and slay queen attitude forcing Neo to pack his things and run from the date.

The internet was not surprised by his reaction and even DJ Cleo joked that he wished he didn't share a name with Cleo.

Couldn’t this gal’s name be #Matlakala or something ? Not CLEO 😭😭😭😭#DateMyFamily #Dmf pic.twitter.com/670sI0wWSw

The people filled the Twitter streets with memes calling out Cleo and making it clear that they were not here for her attitude.

Yo! Cleo is so rude and if I was Neo I would have walked out as well entlek I was gonna cancel the date while in the car #DateMyFamily pic.twitter.com/VRPlnO8eHl

Cleo needs to consult someone who “sees things” and knows their stuff… For a chubby guy (1) to walk out on you (2) as the food arrives (3) on your 1st date (4)… No my sister -your problems are spiritual for sure! 😂😂😂#DateMyFamily pic.twitter.com/1XZbz3P0vW

Cleo's attitude toward Neo 😷 she can't even pretend 😏#DateMyFamily pic.twitter.com/newZi3ozco

#DateMyFamily At first i thought the guy was rude but boom Cleo came, she was so annoying. pic.twitter.com/m5xNBjJ3no

While the internet was busy grabbing drinks at the bar at the drag-fest, Cleo was taking to Twitter and Facebook to serve the aces back to her haters and setting them straight on a few things.

Like when she told Neo she lost her phone

Cleo : I lost my phone.
Neo : I'll Email you.
😂😂 maybe she expected "I'll buy you a new one"
#DateMyFamily pic.twitter.com/FfZ9No14sD

And now her reaction:

Even network ya Vodacom is mad at me for apparently being "rude" on TV😳😂😂
Dear Vodacom
I know I lied & said I lost my phone, ndiyaxolisa😭

I didn't go to #Datemyfamily searching for a man

I went there because I was "begged" to take part on the show, by some of its crew members.

Guys thanks, but no thanks

Oh and all those telling her she needs to adjust her behaviour.

If Cleo doesn't change her behaviour and stink attitude, she will end up not having a man. Her attitude isn't cool in the slightest. If you don't like a person, just gather courage and tell him instead of being rude and embarrassing him on TV. #Datemyfamily