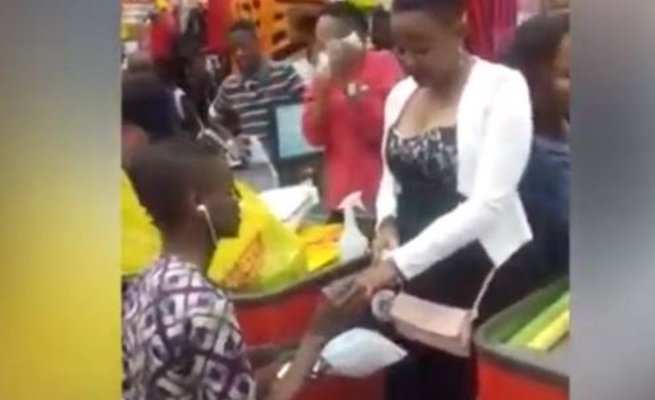 WHENEVER we go to Shoprite, we never expect to hear the words "Will You Marry Me?"

We will only be thinking about what to buy and the price of groceries.

But for 24-year-old Jubilation Magagula, Shoprite was a perfect to express his love.

He got social media talking when he posted his video on Facebook asking his girlfriend Nomqebo Mathebula (25) to marry him right in front of shoppers.

The Shoprite store in Ndodaya Mall came to a standstill last Sunday (10 February) when customers started cheering on for the proposal.

The young couple is from Allandale outside Thulamahashe near Bushbuckridge in Mpumalanga.

Jubilation told Daily Sun that he wanted to do things differently and to show the world that a marriage proposal can be done anywhere without spending a lot of cash.

“We share the same birthday month of January, and February is also our anniversary month because we started dating this month a year ago,” said Jubilation.

He said that since they met she has been so supportive through thick and thin and “I knew that she was the woman I wanted to spend the rest of my life with”.

He said he chose this month to engage her and that together with sister in law, they decided to plan the proposal.

“I asked her to take her to Shoprite at Ndofaya Mall, where I had already arranged with the manager of the shop to make the day a success.

“As I was kneeling, I was so nervous and all the speech that I prepared was out of my head. I couldn't speak at all, and lucky enough she said yes,” said Jubilation.

Excited Nomqebo said she couldn’t hold her tears of joy back and was happy that he proposed in public which is a sign that he was serious about their relationship.