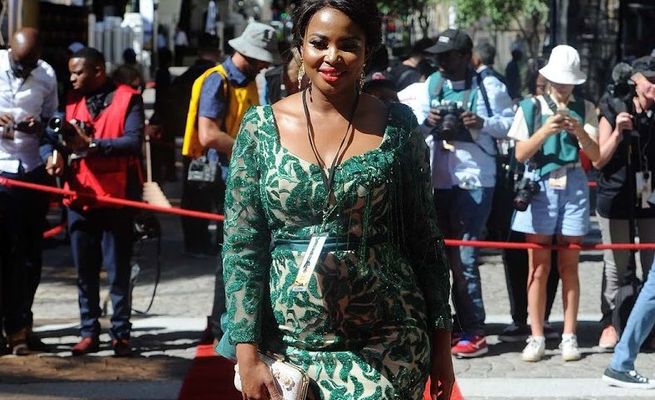 The State of the Nation Address (SONA) is one of the most anticipated events of the year and not just because of the president’s all-important speech.

MPs, politicians, high-profile figures and VIP guests all descended on Cape Town to listen to Cyril Ramaphosa’s speech and show off their red-carpet looks.

While many wowed in stylish outfits, some missed the mark completely.

From near wardrobe malfunctions to stylish evening-wear, the SONA 2019 red carpet did not disappoint!

The dresses are almost identical except that Nomzamo’s look was sleeveless. Many thought that both women looked age appropriate, but some were not feeling this MPs look.

This year she played it relatively safe in a loose fitting long-sleeved white dress.

The wife of ANC MP Matthews Wolmarans caused a stir on the red carpet in a revealing outfit that saw her almost spilling out of her dress.

She was one wrong turn away from a major wardrobe malfunction.

Mmusi Maimane and his wife Natalie

DA leader Mmusi Maimane looked dashing in a navy-blue suit, but his wife Natalie stole his thunder. She was dressed in an elegant asymmetrical jumpsuit.

Mmusi’s mother colour co-ordinated her outfit with his, while his sister stood out in a colourful number.

DA Leader @MmusiMaimane and his wife, @MrsMaimane have arrived at Parliament ahead of #SONA2019. 🇿🇦💙 pic.twitter.com/aCrMhcdwQz

South Africa’s Deputy Minister of Communications left half of Twitter feeling green with envy and the other half questioning her Dancing with the Stars wannabe look.

She looked fierce in a sparkly number by KLuK CGDT. Her sister looked equally fabulous in a stylish suit.

The DA's Phumzile van Damme and her sister arrive at the State of the Union Address #SONA2019 pic.twitter.com/p7EnxPMIDB

Things did not go so well on the red carpet for Minister of Women Bathabile Dlamini. The minister’s red-carpet interview was a big talking point on social media because she could not seem to remember who designed her dress.

Bad memory aside, her black dress with floral detail was pretty decent, though many tweeps disagree!

Minister of Women in the Presidency, Bathabile Dlamini on her outfit on #SONA19 red carpet #SONA2019 pic.twitter.com/gs9wVE0yCx

Police Minister and SONA regular, Bheki Cele, was one of the best dressed men!

Public Protector Busisiwe Mkhwebana was all smiles on the SONA red carpet.

Her look received mixed reactions on social media but she still looked amazing thanks to her gorgeous smile.

I don’t know about other designers but I always get goosebumps when I hear my name on Tv , I always cry abit 😭😭😭 because wow this is truly what I’ve always wanted to do !Honored to have dressed our Public Protector for the #SONA2019 #SONA19 @PublicProtector @AdvBMkhwebane pic.twitter.com/oNol2Cc7qn

Natasha’s dress was too simple for Twitter’s fashion critics.

#SONA2019 DA MP Natasha Mazzone among the first guests to arrive in Parly ahead of SONA. She says she bought her dress at Afrikweens, a boutique shop next to Parliament pic.twitter.com/IVs2rq0UXP