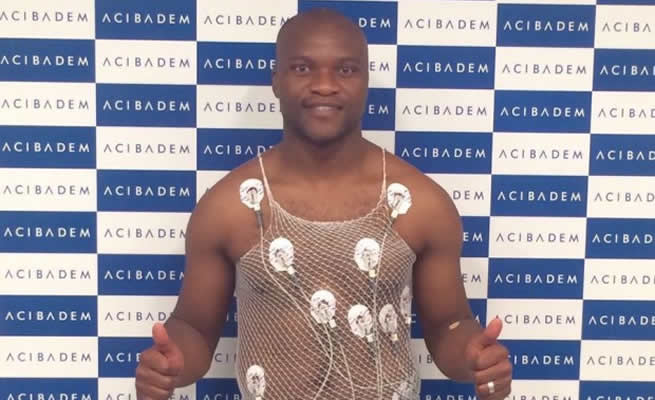 HE SHOT to fame as a promising striker with a deadly right foot, yet he hasn’t once set foot on a soccer field since his return to home soil. But if his ex-girlfriend is to be believed, he’s been doing some sort of striking – on her body, she says.

Former Bafana Bafana striker Tokelo Rantie returned to South Africa from Turkey four months ago with big plans to revive his flailing career with local side Cape Town City. But he hit a few personal snags and the club granted him indefinite leave in December to sort out the relationship problems that have been plaguing him – Tokelo’s marriage was on the rocks and his ex-girlfriend is accusing him of domestic abuse.

His family believe his life is falling apart because his ancestors are angry over his pending split from his wife. Most recently he was hit with claims of abuse.

Sibongile Khote claims he used her as a punching bag whenever his professional life hit a slump.

“He and I were once in love – until he started drinking every day,” Sibongile (26) tells DRUM.

“When he got drunk, he would hit me,” she alleges.

She’d been dating Tokelo (28) since he walked out of Turkish club Gençlerbirligi late last year.

At the time he was still married to Sibongile’s former best friend, Gaoitswe “Gigi” Pule. “I loved that man with all my heart,” Sibongile says.

They were happy at first but when Tokelo struggled to find his feet in the local football league, cracks started to surface in their relationship, she adds.

“I understand he was frustrated because he didn’t know where he stood with the team but I was there for him and supported him.”

Tokelo tried to drown his troubles with booze and this, Sibongile claims, would often lead to violence.

“We drank a lot together but I wanted to stop drinking because I couldn’t stand being beaten every time I said something he didn’t like. “When he was drunk he wouldn’t listen to me and I couldn’t control him,” she says.

SIBONGILE is lying, Tokelo tells DRUM – because she’s bitter about being dumped. He’s never laid a hand on her, he maintains, and he’s moving on – he’s now in a relationship with Ntswaki Magashule (28). “We’ve been dating for four months and I’m starting my life afresh,” Tokelo says.

“I’m working on fixing some of the mistakes I have made in the past.”

Ntswaki, who works as an administrator in the Free State police department, says she’s not concerned about the recent reports painting Tokelo as an abuser.

“Tokelo and I are very happy,” Ntswaki says. “He’s never laid a hand on me. We’re perfect, my dear.”

Ntswaki says she and Tokelo started seeing each other in September when his relationship with Sibongile hit a slump.

“We know each other from back home. We’ve always been attracted to each other but we never spoke until he asked me out last year.

“I decided to give him a chance because I’ve always known him to be a sweet, people’s person,” she says.

She’s heard about Sibongile’s damning accusations, and has even witnessed the two allegedly beat each other up, but Ntswaki maintains Tokelo “has been nothing but kind and loving towards me”.

In December last year Ntswaki and her new boyfriend were enjoying a drink at a tavern in Parys, Free State, when Sibongile spotted them.

“She followed Tokelo and asked what he was doing with me. Before he could speak, she klapped him,” Ntswaki says. “Then he klapped her back – but there were no bruises on her face after.”

One of Tokelo’s ex-girlfriends says he and Sibongile have a long and chequered history.

“When I was with him I knew her as the girl he hooks up with every time he goes home to Parys,” says the ex, who spoke on condition of anonymity.

She recalls witnessing a violent altercation between the two while she was dating Tokelo.

“We were at his house for the holidays when I saw her klap him. I asked the cousins who she was and they told me she was an ex-girlfriend who couldn’t handle rejection.”

Having read the recent reports on the two the woman says she’s grateful she’s no longer caught up in Tokelo’s complicated love triangle.

“Their affair has always been a toxic on-and-off thing,” she says.

Tokelo’s cousin, Princess Rantie, agrees. “I know Sibongile well; she’s my friend and I know everything about her.

“Tokelo maybe hit Sibongile once or twice,” she says

Princess believes Sibongile and Tokelo need to stay as far away from each other as possible. She wouldn’t comment on reports that the Rantie family wants Tokelo to patch things up with Gigi.

According to the tabloids, Tokelo’s family believe fixing his marriage will appease his ancestors but Gigi says she’ll never take him back.

Gigi (26) is tired of Tokelo’s troubles and has distanced herself from her ex.

“I’m not interested, to be honest,” she says. “Right now I’m focusing on my career and family.

“Maybe, when the divorce is final, I’ll write a book,” she adds with a laugh.

SIBONGILE, meanwhile, says she’s also done with Tokelo. “He still has a bright future in football but I can’t be in a relationship with an abusive man.” She’s since moved back to her and Tokelo’s hometown of Parys and has received praise as well as criticism for speaking out about the alleged abuse.

“People are talking and saying I’m lying, that I just want to destroy his career, but I have pictures to show he beat me black and blue,” she says.

Why is she going public with the details now?

“I didn’t want to die at his hand,” she explains.

Meanwhile, Tokelo’s professional career isn’t looking as if it will improve any time soon.

An insider at Cape Town City says Tokelo needs to cough up R870 000 in clearance fees before he’s able to play again.

He must pay this settlement fee because his contract was cut short prematurely due to his poor performance.

Essentially, he has to pay the club for time he’s wasted and as a penalty for being released early – and he can’t play for any other club until he’s settled his debt with the Mother City outfit.

“There’s a lot happening in Tokelo’s life,” the source says.

“The divorce, the Sibongile girl who says he abuses her, and the excessive drinking.”

It’s uncertain if the struggling soccer player will be able to fork out the fee, the source adds.

“His personal life is a mess.”