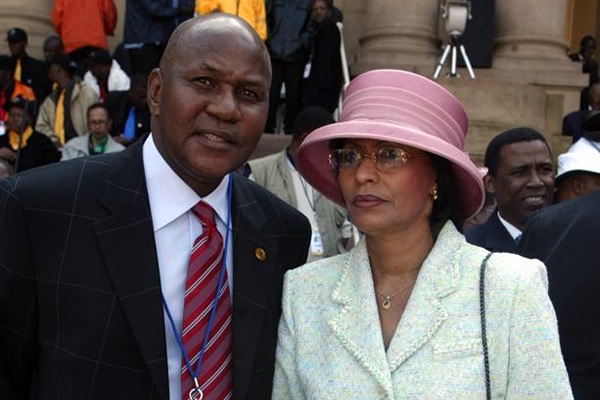 Kaizer Chiefs founder and chairman Kaizer Motaung is locked in a bitter legal battle with the family's former lawyer after the sheriff attached R375,000 from his bank account in November last year using a subpoena issued by the South Gauteng high court.

The attachment follows a default judgment granted against Motaung by the court on September 20 2018 for payment of the sum of R3 055 188 plus interest and legal costs.

The bill was allegedly owed for legal services rendered to their son Kaizer Motaung Jnr.

Sunday World can reveal that these events have now triggered a legal fightback by the Motaungs, who filed an 800-page counter application against seeking to set aside the default judgment together with various other orders against their former attorney.

The family has now asked the court to set aside all attachments of assets and an order that the R375,000 taken from Motaung senior's bank account be returned. In addition, they want the fee agreement signed by Motaung Snr's wife Julegka be declared not binding on the joint estate of Motaung Snr and his wife.

They also want Merchak's legal bill to be assessed by an independent expert and that he pays the legal costs of their application on a punitive scale. The attachment orders seen by Sunday World shows that they were all obtained against Motaung Snr's bank accounts and assets, something which appears to have enraged the football icon and his family.

According to a writ of execution dated 30 October 2018, some of the assets targeted by the sheriff included fourt Motaung Snr's bank accounts. Other assets include movable ones such as motor vehicles, office furniture and equipment all of which, if effected, are to be collected at the Kaizer Chiefs Village in Naturena, south of Joburb. The writ of execution also shows that the sheriff had also set his sights on Motaung Snr's shares in several companies where Motaung Snr is listed as a director.

In the papers, through an affidavit, Motaung Snr argues that he cannot be held liable for the R3 million legal bill raked in by his son, Kaizer Jnr, and neither can his joint estate with his wife. This, he said was because he did not consent for his wife to enter into an agreement with Steve Merchak Attorneys to represent his son.

In challenging the court judgment against him, Motaung Snr argued that his wife, Julegka entered into the agreement with Merchak without his knowledge. Before launching their application against the lawyer, Motaung Snr, apparently demanded a written undertaking that they will not attach the assets in his communal estate pending the challenge to his legal bill.

"On or about July 2015, unknown to me, my wife signed a 'standard terms of engagement' in favour of Merchak containing terms upon which his profssional services were engaged to act on behalf of Jnr in his divorce matter (and ultimately in other matters in which Merchak has rendered service to Jnr).

My wife never told me that she signed the engagement. My wife never presented the agreement to me for my consideration or signature," said Motaung Snr in his affidavit. He furthersaid his wife and Merchak failed to obtain his written consent to incur expenses on behalf of his joint estate, as is a requirement by the Matrimonial Property Act.

"I am not liable to per Merchak and Our joint estate is not liable to pay Merchak; and Merchak has no cause of action against me and the judgment that he obtained has no basis in law," reads the documents.

According to his court papers, Motaung Snr said he only became aware of the matter after receiving a call from Merchak, which only came when payment became a problem. Motaung further argued that despite his knowledge that they were married in community of property, Merchak failed to obtain his consent to the fee agreement.

In the same application, Motaung Snr also claims he made payments to Merchak as loans to his won Jnr towards settling the legal bill.

"Jnr must repay the loans, that is our agreement. These facts do not render our joint estate (or myself personally) liable to pay Merchak," reads the affidavit.

Motaung Snr argues that simply because they helped Jnr to pay some of the legal bills does not mean they accepted liability for the bills. He also argues the bills are 'heavily disputed'.

Motaung accused Merchak of trying to litigate them against all costs, stating that he failed to provide taxable bills of the legal costs requested by his son before he took judgment against them. He also states that Merchak refused to provide a breakdown of his legal bills and as such had left his son Junior and the family to distrust the correctness of Merchak's past bills.

Motaung says he refused to accept service by the Sheriff when the summons were brought to him at his club's address in Naturena and believed that there was no obligation on him to defend the summons.

HOW IT ALL BEGAN
Motaung Snr's court application against Steve Merchak Attorneys came after the South Gauteng high court issued a default judgment in favour of the law firm, ordering the Motaung family to foot Merchak's legal bill of R3 million.

According to court papers, the default judgment was obtained by Merchak, through his lawyers Tshabalala Attorneys on 18 September 2018. In total, Merchak's bill came to R95 million of numerous of their son's legal battles with his ex-wife.

In his summons filed last April, Merchak claimed the family had only paid R6.5 million of the R95 million allegedly due, leaving an outstanding balance of R3,055,188.84.

WHen Motaung Snr failed to give formal notice of his intention to defend the action Merchak applied for a default judgment against him. That judgment is now being challenged.

Kaizer Jnr has however, defended the summons and his case is still pending. At the time of writing, Merchak had not yet filed opposing papers to the Motaung's application to set aside the judgment.

Tshabalala Attorneys, speaking on behalf of Merchak, refused to comment on the matter stating that teh matter was still before the courts.

Alex May for the Motaungs said: "Please note that the matter is subjudice and our clients have no comment."