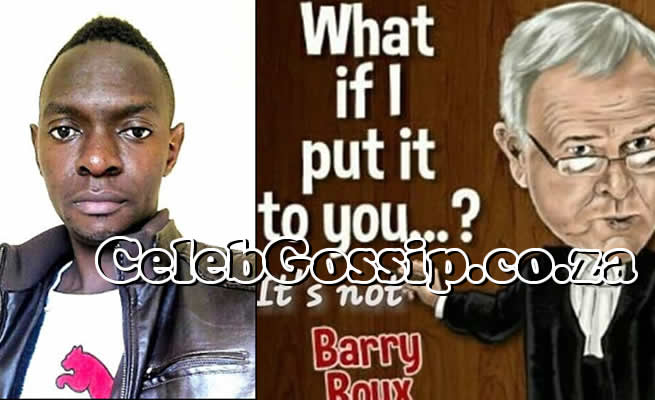 We never thought we’d see the day that the most infamous parody account on Twitter, Adv. Barry Roux, was finally exposed.

However, the day has arrived and the man behind the account has been unmasked.

In an exclusive reveal on News 24, the man who is behind the most salacious account on South African Twitter was revealed to be a Zambian national by the name of Csho “Shepard” Chilala. The young man is a blogger from southwest Lusaka and has been operating the account, which boasts nearly 500 000 Twitter followers, ever since 2014.

His Twitter account, named after South African lawyer, Barry Roux, poses as a parody account but its messaging has led to some very real-life debates, conversations and inquiries. However, the identity of the person behind the account has since been a mystery until this week.

News24 revealed that a series of online investigation and Google reverse search engineering led to him finally being unmasked for the first time since his debut online.

Chilala first found his way into South African twitter circles when he began commentating on the Oscar Pistorius trial, using his own handle before eventually switching to @Barry_Roux. In 2017, he started using the account we’ve come to know @AdvBarryRoux and that’s when his content diversified.

One of his most famous exposés came at the very beginning of 2018. At the time, @AdvBarryRoux alleged that Kelly and Zandie Khumalo were part of a cover up that aimed to hide the fact that Longwe Twala had accidentally killed Senzo Meyiwa in a scuffle.

The account went on to allege that legendary musician, Chicco Twala had paid the Khumalo sisters to keep quiet about Senzo’s murder.

This conspiracy theory, while completely unproven, was lapped up by the masses on Twitter who went on to push the SAPS to further investigate all those who were in the room when Senzo was killed.

This isn’t the only wild accusation that Chilala’s parody account has made.

It has also made bold claims that Shadrack Sibiya played a role in the kidnapping of Bheki Lukhele; adding that the former Hawks leader was involved with criminal, Radovan Krejcir. Outside politics, Chilala’s account has also attempted to shame slay queens while accusing some of Mzansi’s biggest social media influencers of pimping out girls.

AdvBarryRoux has also been caught spreading blatantly fake news; with the DA and the SAPS having to issue statements, urging followers not to believe the fabricated content.

It remains to be seen what the next steps will be and how the fake Barry Roux will be dealt with by the masses and the authorities but a big portion of his influence will surely have been dented by this latest reveal.

With this story growing in popularity, @AdvBarryRoux responded by laughing off the suggestion that he had been exposed:

Do you think that Csho Chilala is actually @AdvBarryRoux or has the press been led down a rabbit hole?