Here is Khanyi Mbau‘s take on casual s.e.x. “Decembering” is a fun, yet a loose term that was used a lot over this past festive season, and many of us were doing a lot of “Decembering” – including anything from just lazing around, partying hard and drinking. For some, this also included having a lot of s.e.x, (casual s.e.x, especially).

Now December is also known as the month where a lot of promiscuity happens, there was even a joke about how some couples breakup, and only get back together in January.

Whilst this topic was still hot on social media, one of her followers wanted to know what Khany Mbau’s thoughts were about casual s.e.x and this is what she had to say:


Khanyi is definitely on to something. If you were unaware, there are a lot of energetic implications that occur when you engage in s.e.xual intercourse with different people. Apparently, this can affect your aura in many ways.

According to collectiveevolution.com, it is said that when you engage in a s..e.xual act with someone, “their aura leaves an imprint on you that is difficult to energetically cleanse yourself from” 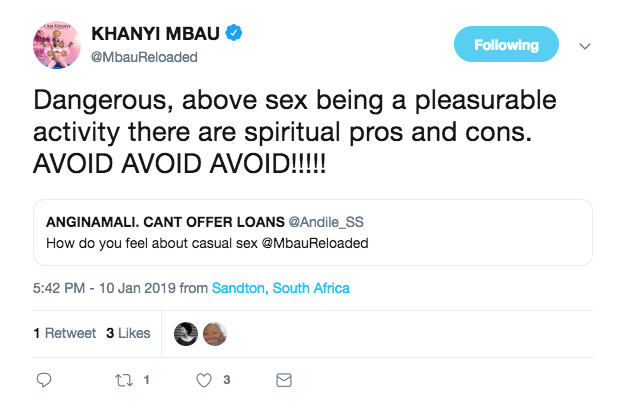 So, the next time you think of engaging in casual s.e.x with someone, make sure you read up on s.e.x and the transmission of energies, it might just save your sanity and health.