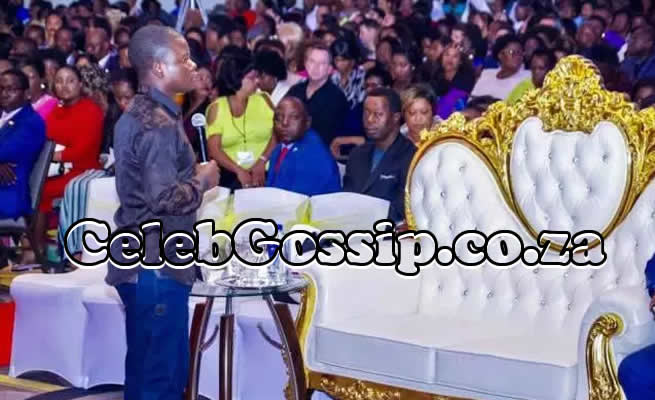 Prophet Bushiri distances himself from his church. Speaking at a press conference on Friday, Bushiri’s spokesperson Maynard Manyowa told media that “there has been an incorrect tendency to conflate the person of Prophet Shepherd Bushiri and the ECG Church”.

Bushiri, who was not at the press conference, is currently in Zimbabwe. Manyowa said the deaths were not Bushiri’s problem, but a problem that the church must deal with. “The prophet himself has been distant because he is a heartbroken man, he is a grieving father who must be allowed the privacy to mourn. Moreover, this issue is a church issue as an institution and there are limits to what he can do.”

PANIC DURING A THUNDERSTORM

Three people died and nine others were injured during the stampede at the ECG Church on the night of December 28.

According to the police, they were only notified about the stampede the next afternoon and immediately dispatched officers to the scene.

Police spokesperson Captain Augustinah Selepe said at the time that it was believed that a thunderstorm had caused members of the congregation to panic during the church service, leading to the stampede.

The service had started at around 20:00 on Friday.

Bushiri’s attorney, Terrance Baloyi of Baloyi Ntsako Attorneys, had previously told News24 that the stampede occurred when people tried to take shelter inside the church during a thunderstorm. Baloyi said some people panicked, resulting in three people being knocked unconscious.

“We regret the incident as a church because it happened within our premises,” Baloyi said at the time.

Police have opened a case of defeating the ends of justice against the church as the bodies of the deceased were removed from the church premises without the police being notified of the incident.

“The charge is added based on the fact that police have established that the deceased were [classified] dead at the church premises and the incident was not reported to the police,” Selepe said.

She said the bodies were removed from the church premises and taken to a private mortuary called Red Ford Mortuary. During the press briefing on Friday, Manyowa also distanced the church from the removal of the bodies.

“We had emergency services personnel and paramedics who were at the scene on the day that we lost the beloved members of our family,” said Manyowa.

“No church vehicle was used to transport bodies from the scene where they were injured or the places they were certified dead.

“The church itself did not move bodies, neither does the church own a private mortuary in South Africa or anywhere else in the world. “We have communicated this information with members of the police.”

Following the stampede, irate Tshwane residents attempted to prevent services from going ahead at the church. Last week, a group blockaded entry to the showgrounds where the church is situated.

Regional secretary of the South African Civic Organisation (Sanco) in Pretoria Portia Mokwena said Bushiri owed the nation answers and vowed that the church would not operate until he explained what happened.

Sanco also met with the Commission for the Promotion and Protection of the Rights of Cultural, Religious and Linguistic Communities to find an amicable resolution to the impasse between Sanco and the church following the protests.

According to Sanco, the meeting concluded that the letter of intent from ECG Church to take Sanco to court should be unconditionally withdrawn while processes unfold and pending discussions with the South African Police Service, the City of Tshwane, the South African Independent Council of Churches and the health department.

City of Tshwane Mayor Solly Msimanga has issued instructions to bring the church up to code, following an inspection.

According to a statement by Msimanga, during the inspection of the church it was found that escape routes leading to escape doors and the escape doors to be used during emergencies were obstructed. Dangerous goods, including a diesel trailer, were also found stored inside the building.

Additionally, there was no firefighting equipment, emergency lights or an emergency evacuation plan available.

“It is for these reasons that the City will issue an order to comply. If after 30 days the requisite levels of compliance have not been met, it may result in a prohibition notice being issued with requisite the occupier to cease any and all activity until such time measured compliance is achieved,” Msimanga said in the statement.

On behalf of Bushiri, Manyowa expressed his “heartfelt condolences” and conveyed “deepest sympathies” to the families of the deceased.

“Your loss is our loss and your pain is our pain.”