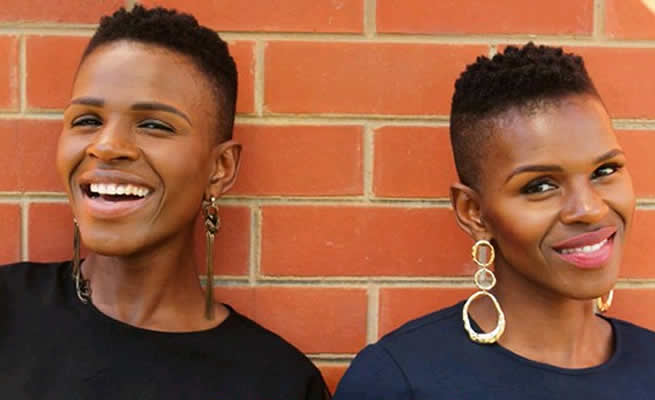 Soul sisters, Imbewu actresses and identical twins Nokubonga and Nokwanda Khuzwayo talk about their strong connection and how even their mom sometimes can’t tell them apart.

The saying “two peas in a pod” could’ve been made for these sisters. They’ve done everything together from day one and are so alike even their mother gets them mixed up sometimes. And now twins Nokubonga and Nokwanda Khuzwayo (34) are confusing thousands of South Africans on national TV every week.

They play Zakithi and Futhi on e.tv drama series Imbewu: The Seed, the first TV roles for the identical pair. Some fans believe it’s one person playing two roles because so far they haven’t had a scene together – but in front of us is proof they are indeed two people, practically carbon copies of each other.

Personality-wise they’re rather different, as we discover after spending some time with them on a quiet day in their hectic schedules.

Nokubonga is outgoing and a talker, while Nokwanda is the quieter of the two, happy to let her sister take charge of the interview from the get-go. Nokubonga plays Zakithi Bhengu, the daughter of Zimele, who’s the CEO of Maluju Oil company.

“Playing Zakithi is a big deal for me especially because this is my first TV role. Zakithi is a symbol of power – she is a go-getter and she works hard. I think we have our similarities and differences. Unlike her, I wouldn’t go overboard to get what I want but I am also not scared to ask for what I want.”

Nokwanda, who plays Futhi, says it’s not surprising people think Futhi and Zakithi are the same person. After all, Sthandiwe Kgoroge had some of us fooled when she played twins on Generations for more than five years.

“People must just wait because there is a scene where we will be together,” Nokwanda says. The twins love working together.

“We were born for this,” Nokubonga says. “From a very young age we sang, we danced and we were into acting. As young girls we did a lot of theatre. We try to forget that we are sisters and just do the work.”

The sisters, who were born and raised in Umlazi near Durban, have always loved being the centre of attention and enjoyed theatre.

Still, after finishing school at Umlazi Comtech they didn’t know what they wanted to do so they enrolled at Coastal KZN TVET College, a technical school that focuses on commerce.

“All we knew was we had to get an education and financially assist our mother,” Nokubonga says. Their mom, Nokuthula Xulu-Khuzwayo, was an unemployed widow with five girls to feed “and this forced us to go out there and look for a job”. Nokwanda worked as a waitress in Durban, while Nokubonga worked at a call centre in Mount Edgecombe.

“I only worked there for six months,” Nokwanda says. “I decided it wasn’t something I wanted to do. Nokubonga also quit her job within a year,” she says. But they were determined to help take their mother and siblings out of poverty.

“We then decided to open a hair salon at home, doing braids and things,” Nokubonga says.

“We made a lot of money which allowed us to focus on acting, dancing and singing. In 2003 we participated in a play called Madiba’s Magic Song, which we performed at the Grahamstown Arts Festival. I played the late Nelson Rolihlahla Mandela and my twin sister was in the ensemble.”

That’s when they knew they’d found their passion. Before long the twins were acting on international stages.

Nokubonga joined the Lion King production in 2007 and travelled the world and Nokwanda joined Story Production, a production about African culture and literature in England. They spent almost 10 years away from home.

“I’d been with Lion King for almost a decade and I was starting to become homesick,” Nokubonga says. “At some point I was diagnosed with depression. I had to come back home. When I came back I spoke to Duma kaNdlovu and asked to enrol in his school and he agreed. I was also asked to come and watch the production of Imbewu.”

“He told me to come for auditions that were taking place – they were looking for two people who looked similar. Fortunately, my sister was also back home and looking for a job.” They auditioned, got the roles and are loving every minute.

“When my sister lost her baby I also grieved with her. When I went out to those auditions I knew I was representing her as well,” Nokubonga says. They’ve always been two parts of a whole, Nokwanda adds.

“When we were younger we looked even more identical and we wore similar clothes. Now we try not to wear similar clothes and not to have similar hairstyles,” Nokwanda says.

“Even on set the cast and directors used to be confused. I don’t know how many times I’ve been given Nokubonga’s notes to read.”

The twins are mostly focusing on their acting now, they say. “What I learnt was that talent isn’t everything – hard work is,” Nokubonga says. All that hard work is definitely paying off.